Salon “Off” along the Rio Douro: Simplesmente…Vinho 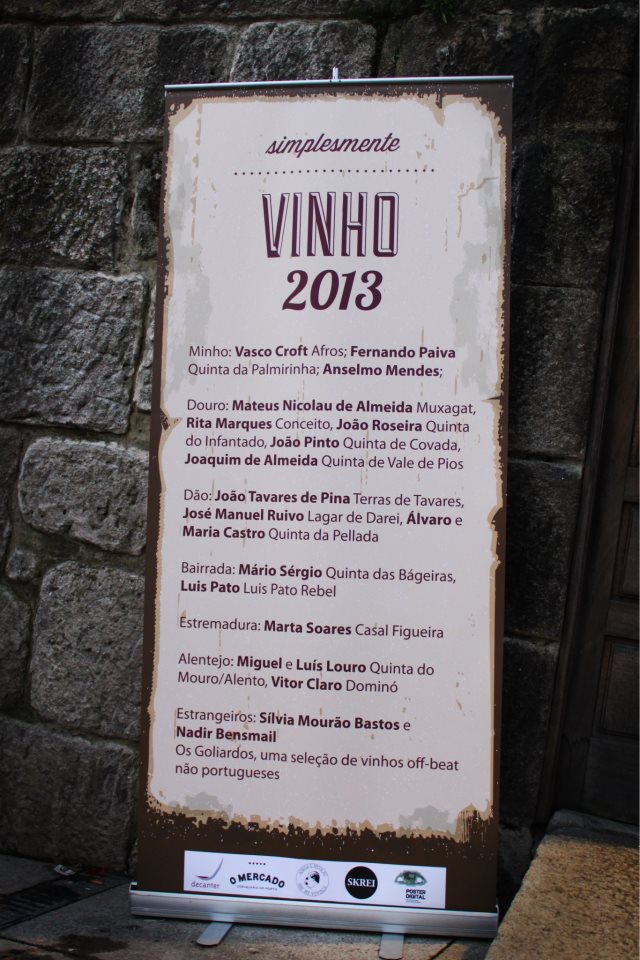 This past Friday, I found my way down to the “Riberia” area of Porto, or rather the historic “Porto side” of the river, where a small group of both established and budding new wine makers assembled to pour their wines at “Simplesmente Vinho”. Dubbed as the first “off” event in Portugal for wine, it begged the question: Off to what?

With a keen eye for marketing, these assorted wine “mavericks” hosted their event just up the road from the largest wine fair in Portugal, Essencia do Vinho, which was celebrating their 10th Anniversary. Essencia is a 4 day event, priced at 16 euros, within the stunning architectural wonder, Palacio da Bolsa. For those of you who haven’t visited the Palacio, please visit it! Built in the 19th century, it’s grandeur is so profound, your jaw will drop at its sheer beauty. The event is also known for crowning 10 Portuguese wines, “The Best of the Year”.

To be honest, I have the utmost respect for an event that has not only garned an incredible following within Portugal, but has lasted 10 years of which half has included an economic crisis. Plus, it’s nice to reminisce when Gabriella and I participated in the judging process many moons ago. This last trip marked my first time back, but it definitely won’t be my last.

Why the “Off” event?  While Essencia is most likely a good thing for the industry as a whole, it’s a 400 pound Gorilla sitting in the middle of the room. It has a formula, and the 2,000€ price tag for an exhibitor’s table is a hefty amount for what is essentially a brand building activity for the local wine market. Hence, as smaller wineries couldn’t afford such a steep entry fee, they created a counter event.

João Roseira from Quinta do Infantado created “Simplesmente Vinho” with 17 fellow producers from across Portugal, as well as a lone ranger from Spain. With names like Luis Pato and Quinta do Mouro, along with lesser known wineries like O Casal Figueira and Conceito Vinhos, it speaks to a great event from the get go. Gathered in a stone cave, along the shimmering Porto waterfront, we were introduced to a wide range of lesser appreciated wines. Examples included various bio-dynamic wines, such as Vasco Croft’s, Aphros. O Casal Figueira featured their artesanal, or natural, wines showing a great deal of fresh and pretty flavors. Luis Pato made sure to provoke curious onlookers, bringing his 100% Fernão Pires with 6% Baga. I’ll let him explain the math another time, but for those that don’t know Fernão Pires, it’s a white grape. Where the mystery lies is that the wine is red. Luis also brought a 100% Maria Gomes sparkling wine made in “the ancient method”, where the fermenting wine in barrel is transferred directly to bottle without any extra steps or dosage. Dry as a bone, fresh and lively this was a treat to taste, not to mention a fabulous reminder that people should pay particular attention to Portuguese sparkling wines.

Sadly, due to time contraints, I was only able to get through approximately 1/2 of the wines, but of the wines I tasted, I was thoroughly impressed. These were wines that made me think. Wines that had passionate wine makers making them, pouring them and sharing their stories. These winemakers largely did not have the budget for Essencia (with the exception of Luis Pato who was at both), but desired a space to share their creations. As the night wore on, and the magical Douro river drew more people to the far end of the room to watch the glimmering lights dance across the water, I felt the newfound energy in Portugal, a pulse that things were changing in some way.

By the end of the event, I felt good about where Portuguese wine culture is heading. Porto, and maybe Portugal as a whole, is undergoing an exciting change. There is a new energy. New excitement to explore again.

BOOM! I can’t wait to see where it takes us….

All the producers who were present:


simplesmente…Vinho 2013 from Gustavo Roseira on Vimeo.