Street Food is Picking Up Speed in Portugal 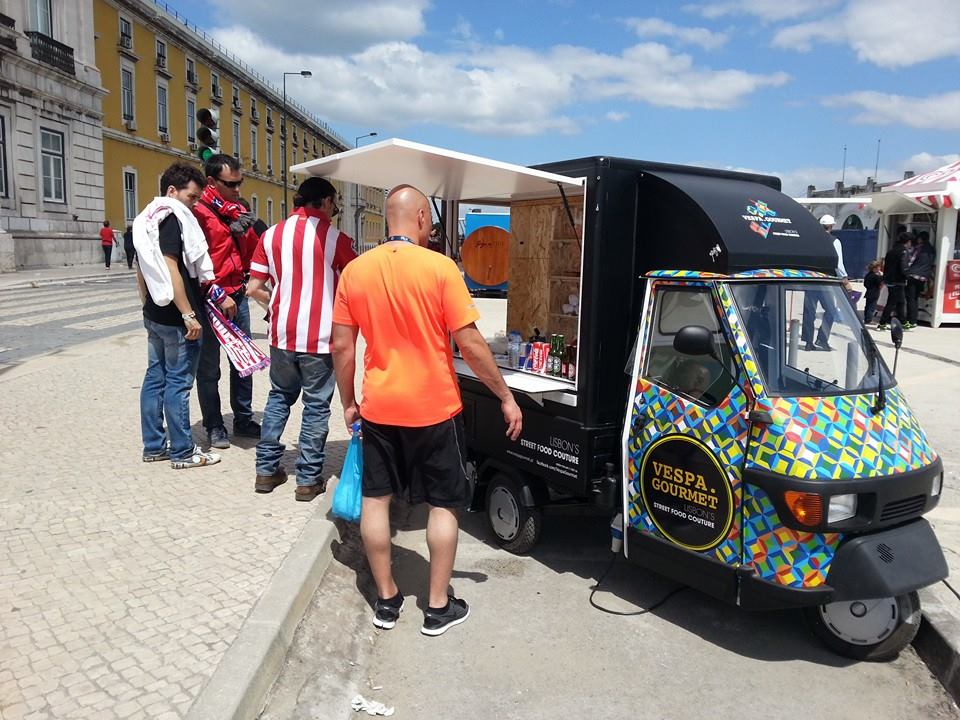 From fried snakes on a stick to dirty water hot dogs, there hadn’t been anything novel to buzz about in the street food scene for years. That is, until five years ago when the gourmet food truck craze exploded in Los Angeles. Professional chefs jumped behind the wheel and turned that city’s down economy in their favor by reinventing the American street food experience. Powered by social media, tweeting locations and menu specials, there was no stopping these folks. The trend spread like wildfire across U.S. cities and beyond. Though these meals on wheels have reached saturation in some cities (time for Darwinism to kick in), the concept continues to pick up speed in untapped territories.

In Portugal’s biggest cities, where every street corner is an excuse for a café, the demand for street food hasn’t been significant over the years beyond your “castanhas” (roasted chestnuts), “Bolas de Berlim” (sugary, cream-filled doughnuts at the beach), or “roulotes”—auto caravans selling greasy grub outside nightclubs, sports events and festivals. But this is rapidly changing.

Last summer, five entrepreneurs in Lisbon hit the streets of the capital for the initiative “Lisboa sobre Rodas” (Lisbon on Wheels). A mix of brick and mortar and food truck businesses, the promotion was meant to show the potential of these meals on wheels without jeopardizing traditional food businesses. Currently, there are 60 food trucks (50 in Lisbon and 10 in Porto) allowed to operate at organized events, but a push is being made to alter legislation to get them officially on the streets. These efforts are being led primarily by the newly-formed Portuguese Street Food Association, which sees these wheeled businesses as an asset to local economies. And, so do we—they’ll have to purchase permits from the cities and pay taxes. Revenue! Plus, it encourages young professionals forced to emigrate for work to stay in Portugal and generate jobs. For consumers, it provides options and new flavors. And for society as a whole, it can serve as a vehicle to forge relationships in needy neighborhoods that often miss out on quality food. If they can’t get to the food, the food goes to them. After all, food is the best tool to bring people together.

Next month, there’s a renewed effort to spotlight street food in Portugal. Presented by APTECE (Portuguese Cuisine and Economics Tourism Association) and in conjunction with the World Food Tourism Summit, the city is dedicating nine days (April 4 – 12) to the Street Food European Festival in Cascais + Estoril.

As Portugal’s appetite for street food gets bigger, we asked one of the faces behind the new street food association and the festival to weigh in. José Borralho, founder and president of APTECE, shares his thoughts on the topic as well as insider tips on enjoying the beautiful beach towns of Cascais and Estoril.

What is the current state of street food in Portugal?
More and more people are interested in street food. There is a young generation of entrepreneurs that see this market as a way to create self-employment that is fun and sustainable. For others, it’s a way to develop their brands. This is also happening in other countries like the UK, however, in Portugal it’s growing very fast. One year ago, we had around 10 concepts. Today, we have more than 60 and it’s growing. Street food is an interesting business concept, because it generates new companies, product development and can even complement an existing food, for instance, promoting a restaurant. In countries where this movement is strong, we’re seeing young chefs betting on street food. This brings quality to the market and inspires others to also do better.

What do you see as the future of street food in Portugal? Is it more than a fad?
With more than 60 different concepts, it’s already a reality and something that the cities have to seriously consider. I think it can be strong; however, there are a few concerns with business models and the relationship with other food businesses. With the exception of five in Lisbon based on an experimental program promoted by the municipality, these concepts are not allowed to be on the streets, unless they are at specific events like the Street Food Festival. We don’t have specific street food legislation in Portugal. The current legislation is outdated and generally geared to street sales. The legislation does not take into account the market evolution. This means more than 90% of these street food concepts survive on doing private events, which makes it difficult to grow the market. It’s critical to change the legislation. This is why we will have Richard Johnson, the British Street Food Association CEO, to talk about this topic at the festival. This is also the reason that this month [March], we officially launched the Portuguese Street Food Association.

What are consumers in Portugal interested in?
We have everything from traditional Portuguese food to bagels, burgers, tacos, coffee, yogurts, fries, sushi, sweets and wine. Each concept is unique with tricked out Piaggios, Airstreams, caravans, vintage cars, etc… It’s amazing, and that’s also what makes street food special. It’s more than food, it’s a spectacle. It’s important to note that consumers love experiences, entertainment and sharing it all. Food in general, but street food in particular, is a way to socialize and discover new concepts.

Who are the faces behind the trucks?
It’s mainly a young generation of entrepreneurs that are faced with today’s unemployment problem. They are seeing street food as an opportunity to create self-employment to start and then aim to expand their business to another level. Most of them are creative and energetic, and I have no doubts they will expand current concepts, create new ones and even develop their brands internationally. We need this generation of people that explore new opportunities and don’t leave their country.

Is this a business model that can work beyond Lisbon and Porto?
Yes indeed. Of course, every entrepreneur should study carefully each area’s potential. Street food makes sense in areas with organic traffic, or where people are constantly moving about. Mainly, they have to be implemented in big cities with also a touristic impact. Cities like Lisbon, Cascais, Estoril, Sintra, Porto, Coimbra, Braga, Aveiro have potential. So does the Algarve and other coastal areas that in the summer receive many people and events; those with more than 200,000 residents that can sustain a successful market, like Oeiras and Almada. Street food should be developed based on local consumer expectations and needs, just like with any other business.

In cities with street food success stories, social media played an integral role? Will that be the case in Portugal?
With the Portuguese Street Food Association, we are working on a website, Facebook page and probably an app to help the entrepreneurs promote their business and help consumers to find them. It was an important step to gather all the street food professionals and create an organized community.

What are your objectives with the street food festival?
When we started to organize the World Food Tourism Summit, we identified the importance of street food in food culture promotion. With the growth in Portugal and in Europe in mind, we challenged the city of Cascais to join us in creating the Street Food European Festival. The goal is to have consumers interact with the WFTS through the street food by enjoying and sharing their food experience. We expected one year ago to receive around 40 food trucks and suddenly we have 60, with people coming from UK, Germany, France, Poland, Italy and more. I believe we’ll have one of the largest, if not the largest street food events in Europe, which we’re certain should be implemented yearly from now on.

What can consumers expect to see and enjoy at the festival?
We are in the middle of Casino Garden with an amazing view and 60 diverse vehicles. We expect nice weather, so people will have the chance to listen to good music, enjoy tasty food and beer. In partnership with Estrella Damm and RFM radio, we will have acclaimed chefs and bloggers doing cooking demonstrations as well as impromptu music performances. I think the festival will have all the ingredients to entice people to stay two or three hours simply to enjoy, take pictures and taste as much as they can.

How to get there?
The train ride from Lisbon to the coast is an excellent option. It’s scenic and avoids traffic. But if you’re traveling by car from Lisbon, take the A5 highway and you’ll be there in 15 minutes. You can also opt for the coastal route (30 minutes).

Best spots to eat?
There are so many wonderful options, it’s difficult to choose. But the “Mercado da Vila,” a recovered market, is a tasty way to start. For an intimate waterfront view, check out the Albatroz Hotel or Farol Hotel Design. They’re basically inside the sea! If you love sand and secret places, go to Bar do Guincho. For a coffee break, head to Garret Café. Nightlife at Casino Estoril is a must. Enjoy also, Nobre restaurant. Finish with a sunset drink at the promenade along Tamariz beach.

Best beaches?
Tamariz and Guincho are my favorites.

Landmarks not to miss?
Trace the entire coast by walking from Estoril to Cascais. Enjoy the Baia de Cascais, the Cidadela, the Marechal Carmona Gardens, the Casino and Estoril Palacio Hotel—that’s where Ian Fleming hatched his plot for “Casino Royale” and James Bond was born.

Festivals not to miss this year?
Estoril Jazz Festival, May 9 – 17 and Estoril Film Festival, November 6 – 15