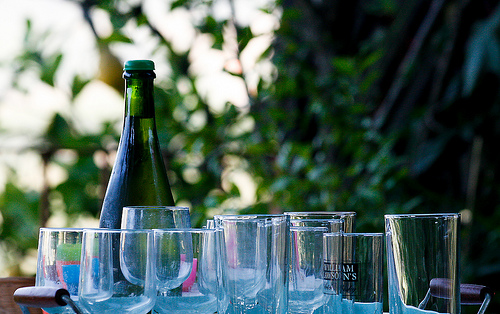 I’m pretty certain my father-in-law buys an extra dozen clams just for me each time he whips up his special recipe for the family. It’s not uncommon to catch him staring over at me as I devour mounds of the shellfish and sop up the garlicky sauce with Portuguese rolls. “Soninha, ” he says, teasingly. “Come on that’s it? There’s more in the pot.” Without hesitance, I dump more clams and sauce into my bowl and pour another glass of Casal Garcia vinho verde. I can go all night.

For 16 years now, my father-in-law (or Mr. Ze as I endearingly call him) has been feeding me his version of the popular Portuguese petisco “Ameijoas a Bulhao Pato” in his Jersey City home, which he shares with my mother-in-law Carolina and, where they raised my husband Paulo and his younger brother Marco. Mr. Ze (Jose Nolasco) was born in lower Alentejo in the south of Portugal in the remote village of Vales Mortos. At 11 years old, he left his hometown and eventually landed a job at a café in Casal do Marco, half-way between Lisbon and Setubal, a major fishing port in the area. At 22 he migrated to the West Village in New York City where my husband was born, followed by a five-year stint in Brooklyn, and ultimately settled with the family on the other side of the Hudson. Having always worked in big-name New York restaurants, such as the Grand Central station staple, The Oyster Bar, he decided to open up a restaurant of his own with a friend originally from Arcos de Valdevez, Minho, in the north of Portugal where the one-of-a-kind vinho verde is produced. It was a pairing made in heaven.

The partners opened up Cervejaria Portugal in East Newark, where they experimented with recipes from the old country, and where the clams “a la Mr. Ze” were born. The signature ingredients are a dab of mustard, butter, and Accent to enhance the flavors of the dish. Though some regions in Portugal use parsley in this recipe, Mr. Ze prefers cilantro, which is predominantly used in the Alentejo region he comes from. The cilantro makes the dish refreshing, which combined with the mineral and crisp qualities of a vinho verde can be an excuse to sit at the dinner table for hours.

When recently attempting to replicate Mr. Ze’s clams in my own kitchen, I added a twist by pairing the dish with Clemen Vinho Verde Reserva 2008 (a Trajadura and Alvarinho blend) instead of Casal Garcia. This wine is double in price (around $12) with slightly higher alcohol content (probably a poor choice for often heated big fat Portuguese gatherings). At first, I was disappointed with the results as the liveliness I once tasted in the wine (before the pairing) became tamer. It appeared the zest and the mustard in the sauce overpowered the citrus notes of the wine. Trying again with less sauce now and more of the mollusks, the mineral qualities I had imagined would complement the dish were resurrected as the wine’s granite notes battled the sea salt flavor of the clam shells for a seat at my palate’s table. The confusion made me miss the lighter, drier and less complicated Casal Garcia. But hope was found in the cilantro, which glued to my sauce-soaked bread burst with flavor as I bit into it and took a sip of the wine. Divine! The soapy, clean flavors of the herb lifted the fruitiness of this wine, which is subtly sweeter than other vinho verdes I have consumed in the past. I’m not saying to whip up a cilantro salad to pair with this nectar of the Iberian gods, but drinking it with more cilantro-infused foods is a suggestion. The surprising and pleasant result of the night was how well the wine paired with the pork chops my husband urged I broil (clams alone don’t constitute dinner in his book). I had marinated the chops in white wine, a basic Chablis

I generally use, and garlic. I dissolved a bit of mustard in the marinade and brushed the mixture onto the meat before broiling. The now sweetened and charred pork chops were a delight with the medium-bodied wine, which with this new combo became creamier. I speared another piece of pork and wrapped it in a string of cilantro swimming in the bowl once brimming with clams. There it was all along—pork and clams! More precisely “Carne de Porco Alentejana,” the pork, potatoes and clam trio in a cilantro, garlic sauce traditionally made in the Alentejo region. We had indeed come full circle.

If however, these recipes have piqued your interest and desire to taste it on Portuguese soil, why not treat yourself to an Alentejo Food and Wine Tour or let us put together a full custom foodie tour. Then you can dip, sip and nibble your way through buttery presunto, savory Feijoada Transmontana and delicate Rojões à Moda do Minho, not to mention a wide variety of spectacular wines! Contact us today for more information.