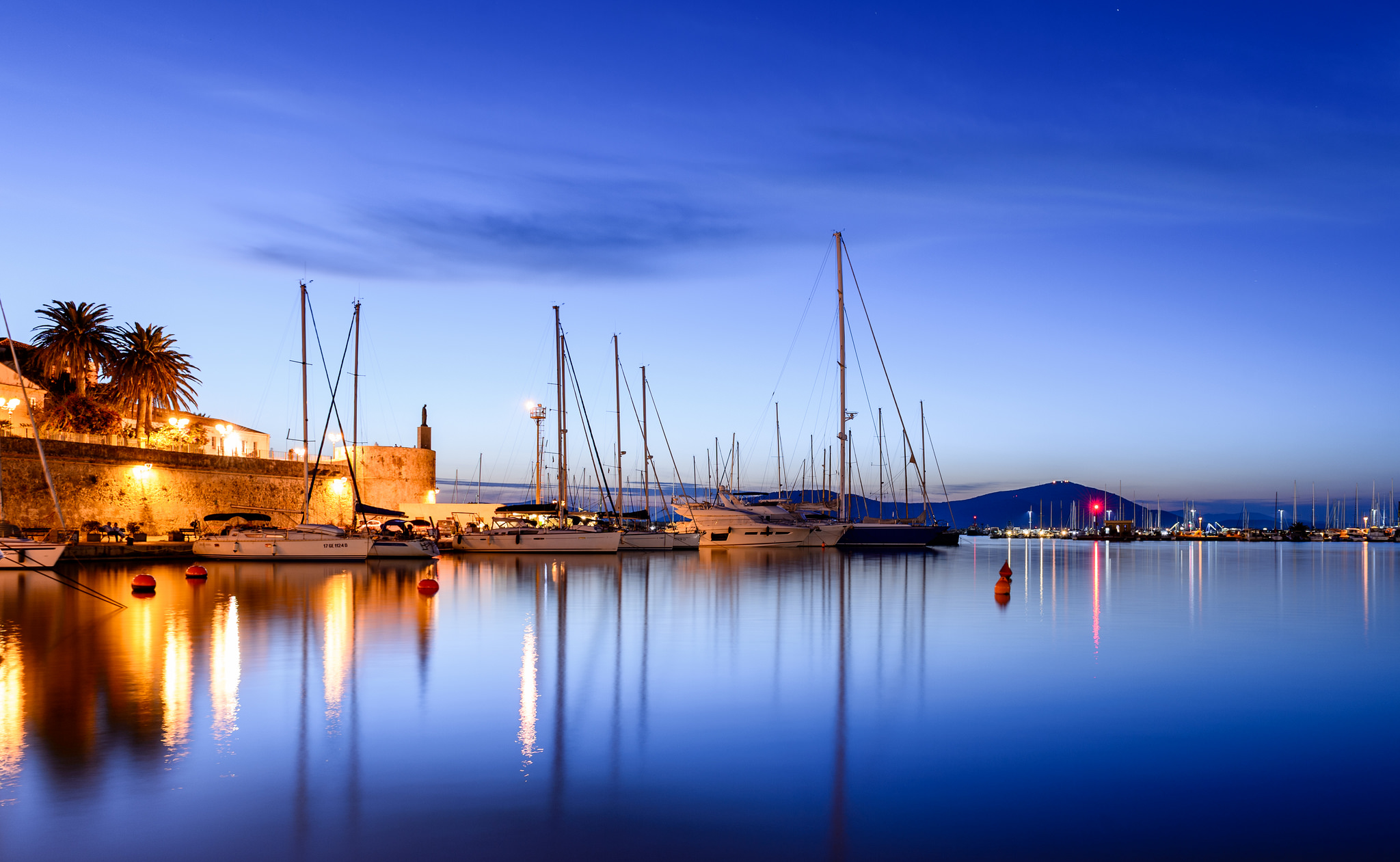 Imagine a social event in Italy or Spain and you are likely to conjure up images of long lunches over copious glasses of wine, children running amok among 1,001 family members, a powerful mother figure who unequivocally has the final word, and ridiculous amounts of food.

While these two countries share linguistic ties, a rich and textured history, heaps of amazing art and music and enough stunning nature to make the heavens weep for joy, never in my wildest dreams would I have imagined the existence of a town in Sardinia that spoke Catalan! (photo by Alessandro Caproni)

Alghero, in north-eastern Sardinia is known locally as L’Alguér, a Catalan name that captures the many facets of a culture with which this small town is impregnated. Its streets (such as Carrer del Bisbe, Carrer de Pepi Gallo), cultural heritage, traditions and gastronomy are echoes of Alghero’s Catalan past. Even the Town Hall proudly flies the red and yellow striped flag high in the air to announce their allegiance and kinship.

Italy has many local stories of conflict, conquest and political upheavals. Dialects and local traditions have been forged and molded by a wide range of historical influences and dominations. But the heritage left by Catalans in Alghero is astonishing.

Founded in the XII century by a family of merchants from Genoa, Alghero’s strategic position in the Mediterranean was a major draw for the Catalans. Under the Aragon Crown, they eventually overthrew the Genoans in the XIV century and ruled, prosperously, through the XVIII century. Their impact was social, political, cultural and economic, fostered by fiscal privileges and customs exemption on commerce. Simultaneously, Catalan became the official language, surviving as the local language even after the fall of Aragon.

Over time, the linguistic ties that bound the two nations evaporated. Catalans were unaware that their own language was still spoken in the village of Alghero, while the people from Alghero came to believe they were speaking a local Sardinian dialect. It wasn’t until the 1860s, when a Sardinian activist acknowledged their common cultural heritage during a conference in Barcelona, that the two nations rekindled their “friendship”.

Much like Cuba, the geographic isolation of Sardinia helped to preserve cultural influences, with the language being only its most obvious element. Today, the dialect of Alghero is officially recognized as a variant of Catalan.

Alghero’s “Catalanity” appears in the dialect, but also in local family names such as Roich, Garau, Pons, Cardona, Brau, Masia, Pau; or in the names of local Saints, such as Aleixi (Catalan: Aleix), Bardili (Catalan: Baldiri), Gordi (Catalan: Jordi). The religious hymns called Goigs – sung in Catalan during pilgrimages and celebrations – are a prime example of how the language was kept alive through the centuries thanks to the oral tradition. (photo by wine harma)

Historical monuments in the center of Alghero also display strong Catalan influence. Saint Mary’s Cathedral looks to the late-gothic Catalan style for inspiration, while the Saint Francis Church and the many historic buildings such as Palazzo d’Albis, Palazzo Machin and the L’Esperò Reial Tower more soundly revive the Spanish legacy.

In this artful mosaic of cultural influences, gastronomy is by far the most popular. Among Alghero’s specialties, you shouldn’t miss the Aragosta alla Catalana, a gorgeous boiled lobster served with tomatoes, onions, salt, pepper and olive oil. Although, despite being named “alla catalana”, the recipe seems to have no direct Catalan link, though rumors have it that the people of Alghero proudly ascribe its creation to a local restaurateur who wanted to recall its great Aragon past.

Cassola de Peix, a rich soup made of various types of fish and seasoned with chili pepper and other spices, on the other hand, is undeniably Catalan in its roots; as is Polpo alla Catalana. There is nothing more refreshing and savory than this octopus-based salad mixed with raw peppers, Pachino tomatoes, Tropea onions, carrots and basil, served with a sauce made of olive oil, parsley, salt and pepper, under the summer sun.

Lamb is certainly the other star with Spanish origins, as is the Paella Algherese, a regional version of the Spanish one, made with bottarga (fish eggs) and the typical Sardinian pasta – fregola – instead of the traditional rice.

If you love a meaty, flavorful truffle, you can find it in Alghero! Truffle hunting is an art, and one that’s been perfected in both Catalonia and Alghero. Come Autumn and Winter, seek these out!

The crema bruciata can be a good choice to finish the meal properly: a puff pastry roll filled with cream and covered with burnt sugar, reminiscent of the more famous Catalan crema catalana.

And for wine lovers there are interesting local white wines produced with grapes brought by the Catalans. Torbato, a grape almost extinct as recently as 1970, is the base for both still and sparkling Alghero DOC wines. These refreshing and vibrant white wines have notes of white stone fruits and floral and sea scents which is good either as an aperitif or as a companion to fish.

Vermentino is the other white grape originating from Spain. Although Vermentino di Gallura DOCG and Vermentino di Sardegna DOC are the better known wines, Alghero produces its own DOC called Alghero Vermentino Frizzante, a characterful dry or off-dry fruity sparkling wine ideal with pasta, white meats and as an aperitif.

For red wine enthusiasts there is Alghero Cagnulari DOC. Made from the Cagnulari grape, probably introduced to Sardinia by the Spaniards, it is an intense ruby wine with notes of jammy wild berries and balsamic hints. Perfect with red meat and some rich pastas.

Nowadays, the link between Alghero and Catalonia is so undeniable that in 2009 a branch of the Generalitat de Catalunya was created in Alghero to operate as a Catalan consulate. It aims to reinforce the political and economic relationship while promoting, at the same time, many cultural initiatives between both countries. This was even underpinned by the official recognition of Catalan as a local language by the Italian Law (1997) and its protection as a linguistic minority. Its promotion is the responsibility of several public and private associations, such as l’Ateneu Alguerès, Centre di Recursos Pedagògics Maria Montessori, Centre de Recerca i Documentació Eduard Toda and Òmnium Cultural. Thanks to the commitment of many local bodies, Catalan can now be taught in schools, such as the in “La Costura”, where the Alghero dialect is learnt together with Italian and English.

Anyone curious to experience this language can read the local magazine L’Alguer, totally written in Catalan, or watch the Catalan TV, broadcasting half of its programs in Catalan thanks to a collaboration with the Spanish Corporació Catalana di Radiotelevisió.

Keeping an ancient culture and its language alive is a significant claim of identity. Looking back at our past helps us better understand who we are and what makes us tick. What Alghero and Catalonia are doing to preserve their common past is not only admirable, but a powerful boost to their roots.

Nevertheless, the risk of extinction is always around the corner, unless older generations proudly commit to handing this past and language down to youngsters.