Alheira: The King of Portuguese Sausage 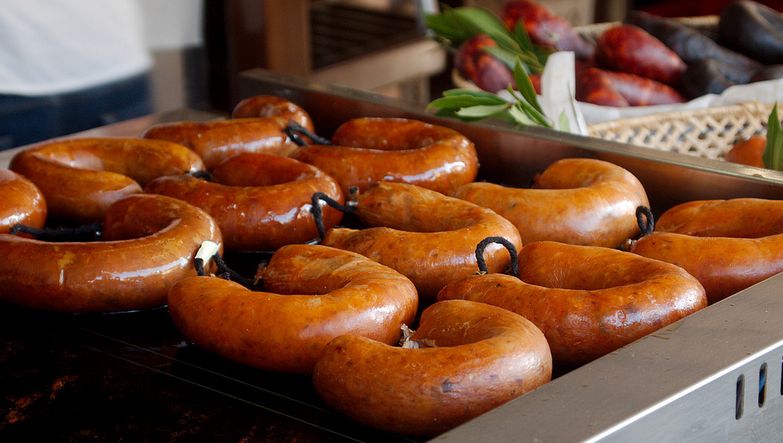 Alheira is a smoked Portuguese sausage, (pronounced “Al – iyai -rah”), that derives its name from the Portuguese word alho, meaning “garlic”. Different from its pork-dominated counterparts, Alheira is not only filled with poultry (chicken and turkey), but also game meat (duck, rabbit, venison, partridge, pheasant): creating a mouthwatering smokey, garlicky and earthy aroma.

Now here comes the interesting part, hold tight! The original Alheira was a pork-free sausage that is rumored to have been invented by the Portuguese Jews during the Inquisition. When the practice of the Jewish faith was outlawed, the Jews, especially the large community in the northern region of Trás-os-Montes, were easily found as they lacked the traditional pork sausages that hung from the smokehouses. To disguise themselves as “New Christians”, they created their own sausage, made from a blend of whatever non-pork product they had lying around. The recipe grew in popularity and eventually spread to the rest of the Portuguese population, who adopted their own varieties made with pork and/or pork fat.

How to Eat Alheira Sausage

Nowadays, you can find Alheira made from almost anything, from bacalhau to vegetarian. The most common varieties are de aves (poultry), de caça (game meat) or de carne de vaca e presunto (beef and Portuguese cured ham). Prized varieties include all the above, or exclusively with javali (wild boar) or prized regional breeds of pig, such as the raça Bísara. As a general rule, Alheira contains a base of pork and pork fat, Portuguese bread crumbs, olive oil and lard, garlic, salt and sweet paprika, then smoked. The most famous Alheiras of these types are produced in the city of Mirandela in Trás-os-Montes. Protected with the IGP certification (“Product of Geographic Indication”), the Alheira is confirmed as a traditional enchido (sausage) of the region and must be produced according to strict regulations.

Because Alheira is made from more perishable ingredients, it must be fully cooked before serving – check out our Portuguese Alheira Recipe. And there are a variety of ways to prepare it. Some of the most traditional methods in the region of Trás-os-Montes are to boil or grill it and serve with boiled potatoes, grelos, cabbage or other boiled vegetables. However the most popular way to prepare it (and one of my favorites), particularly for the Alheira de Mirandela, is to deep fry it and serve with a fried egg on top with french fries, rice and a tiny salad (keyword tiny). Called Alheira de Mirandela, you can find this dish on just about every traditional Portuguese restaurant menu in the country. Though it may be one of the least healthy ways to eat Alheira, it is certainly one of the most enjoyable and highly recommended!

In recent years, I have seen a wide variety of both creative and delicious ways to cook Alheira, especially in petiscos. With its soft filling and thin casing that can easily be removed, Alheira makes for a fabulous stuffing ingredient. It’s great in puff pastry or phyllo rolls, or even used for lulas recheadas – stuffed squid, which is a traditional dish generally made with rice and cured chouriço. I’ve also seen it as a pizza topping, in scrambled eggs and in stir-fry noodles. Personally, I’ve taken creative liberties by making an Italian version at home, “Alheira Taglietelle”, with leeks and mushrooms. So far, I haven’t had an Alheira combination that didn’t work, but I would suggest that if you use it as main ingredient, instead of stuffing, pan-fry it well so you can get a nice, crispy texture without it getting too soft and sticky.

Food and Wine Tours of Portugal

Regardless of the version, I can guarantee you will become an Alheira lover. It’s a unique and versatile sausage, both as an ingredient in dishes and simply delicious on its own. Travel to Portugal to experience this flavorful sausage firsthand on our Culinary Tour of Portugal, or create a bespoke Food and Wine Tour of Portugal just for you!

Cheers to some smokey, gamey goodness!