How to Find the Best Spanish Brandy 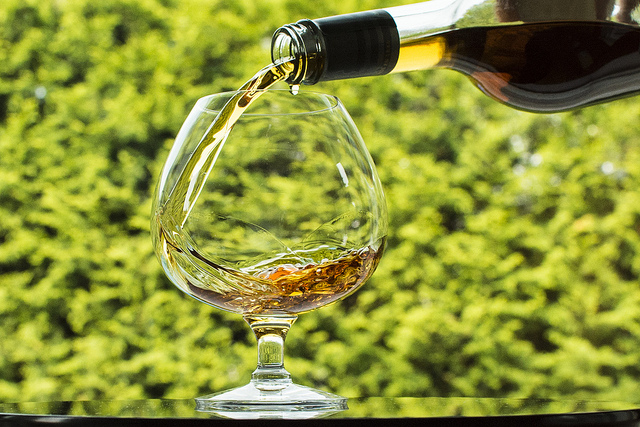 “Claret is the liquor for boys; port, for men; but he who aspires to be a hero must drink brandy…There are, indeed, few who are able to drink brandy. That is a power rather to be wished for than attained.” – Samuel Jackson Sipping brandy neat—no ice, no mixer—is an acquired taste for most, and like virtually all players in the world of alcoholic delights, not all brandies are up to such naked scrutiny. Brandy, by definition is “a strong alcoholic spirit distilled from wine or fermented fruit juice.” Grape brandies come in many forms, be they the fiery, un-aged Orujos of northern Spain, the dry and complex French brandies of Cognac, the aromatic and potent Pisco of Peru and Chile, or the big and bold flavor bombs known as Brandy de Jerez. (photo by Patrik Nygren) While some of the cheaper varieties can be hair-raising endeavors, a good, complex, balanced brandy like those of Jerez de La Frontera of Spain, or Cognac and Armagnac of France, offer a downright delectable repast. Even the often-harsh “pomace” style brandies (distilled from fermented grapes skins, stems, and seed, such as the notoriously-intense Grappa of Italy), can be savored after a big meal in utter contentment when of a high quality.

How to taste Spanish Brandy

One follows a particular protocol when tasting a good Spanish brandy, as with any wine or spirit you may choose to studiously enjoy. The “Consejo Regulador del Brandy de Jerez” (Regulatory Council of Brandy of Jerez) assures us that adding an ice cube to your fine brandy is not a grave offense. Far from it! Serving brandy on ice does not damage the spirit’s character; on the contrary, apart from slowly diluting the pour and prolonging the enjoyment of your drink, this slight dilution is also known to open up a new dimension of flavors in the brandy, as would a dash of water in a good Scotch whisky. Even so, the most classic way to enjoy your brandy is neat, in a balloon snifter, making sure it is neither too big or too small. A typical serving of brandy is around 60ml (2 fl.oz), and should be a small enough pour so that the bulbous snifter can be tilted horizontally (in order to inspect the fine amber color of an aged brandy) without spilling. Also, a balloon snifter fits perfectly in a cupped hand, which facilitates the gentle warming of the glass to body temperature, thus releasing even more aromatic character and enhanced flavors from the brandy. These special vessels, with their wide sides and narrow opening, concentrate the aromas as they leave the glass, better directing them towards the nose. Spanish brandy is generally between 36%-40% abv (72-80 proof), so sticking your nose in the snifter and taking a big whiff of a fresh pour is not likely to be a pleasant experience. Better to ease into the smelling (and eventually tasting) in three steps:

Once you have properly evaluated the complex character of your glass of brandy, it’s time to taste! The first sip should be as small as humanly possible—just enough to wet your lips. As previously mentioned, brandy can be a bit intense at times, and easing your palate into the tasting will warm up your taste buds for many, increasingly pleasurable sips to come.

Spanish Brandy is not Cognac

Brandy de Jerez is a complete unique product that comes with legal protection of “denomination of origin” and some required aging and standards that must be adhered to in order for the spirit to carry the designation of Brandy de Jerez on its label. If you have ever believed that “Spanish brandy is just a cheap Cognac,” you’re mistaken. (photo by Gonzalez Byass) Just as the wines of the world are composed of countless grape varieties and aged in a myriad of ways, Brandy de Jerez is unique in its grape base (mainly Airén and Palomino Fino) and in the journey that the spirit takes from its first fermentation, to distillation, to aging in the unique solera systems for which Spain’s “Sherry Triangle” is famous. The wine used to make Spanish brandy is generally very average, due to the unremarkable quality of Airén grapes themselves (recognized as the most widely planted grape on Earth). But, when Airén grape wine is distilled and aged, something magical occurs.

In the three southern Spanish towns that make up the “Sherry Triangle” just outside of Cadíz (Jerez de la Frontera, Sanlúcar de Barrameda, and El Puerto de Santa María), both sherry wine (Vino de Jerez) and Brandy de Jerez undergo a progressive aging process though “criaderas” and the “solera” — a gradual transfer of aging wine and brandy from one American oak cask to the next. These barrels lay in big stacks at the sherry houses, and the movement of one quarter of the top barrel’s contents to the barrel just below it is aided by gravity and produces a consistent product while maximizing airflow to facilitate oxidation; a key to the distinct character of these unique wines. An essential part of the brandy making process in Jerez is that all Brandy de Jerez is aged in former sherry wine casks, whose original contents (be it the dry and light “fino” sherry, the rich and nutty “Amontillado” sherry, or the syrupy-sweet “Pedro Ximénez” variety) strongly influence the final character of the subsequent brandy. For example, a brandy aged in former “fino” barrels will be lighter in color and flavor than one aged in barrels that previously housed the more intense varieties of sweeter sherry wine.

The History of Spanish Brandy

The history of distillation in Iberia is traced back to the Moors of Spain and Portugal, who brought with them from North Africa the knowledge of how to turn mild alcohols into powerful ones. Used almost exclusively for medicinal and perfuming purposes at first, alambiques (stills) soon made their way into Spanish winemakers arsenals, giving birth to an industry that, at the present, produces some 80 million bottles of Brandy de Jerez every year. The original stills in Jerez de La Frontera appeared in the year 900, though references to the drink that would later become brandy — known as aguardiente, or “fire water”—did not appear in print until the middle of the 16th century. In turn, it wasn’t until the later 19th century that major wine producers of the “Sherry Triangle” began bottling and marketing their brandies under distinct labels. The first international market for Brandy de Jerez was Holland, which acted as an intermediary, redistributing Spanish brandy throughout northern Europe. The word “brandy” itself has Dutch origins, as the Dutch called this aged distillated “brandewijn”—literally “burned wine.” As often happens, English adaptation shortened the word to “brandy,” and the name stuck. Note: The word “sherry” is likely a result of the English finding the word “jerez” (pronounced in Spain as “Hair-eighth”, with a throaty “Ha” and a lisp on the end) far too difficult and cumbersome to vocalise in the blistering Andalucían heat.

There are different strength levels of the “fire water” base for brandy, and the lowest intensity spirit (which makes the best brandy) is still known to this day as “Holanda” in Spain. This product is generally only around 33% abv, the decreased amount of alcohol allowing the finer notes of the resulting brandy to shine through. Unfortunately for brandy lovers in the USA, laws there require anything labeled as “brandy” to be 40% abv or higher, forcing the hand of exporters and perhaps contributing to the misunderstanding of Brandy de Jerez by a market with big potential. Of the 80 million bottles produced annually of Brandy de Jerez, 20 million are exported, the majority of which are ultimately consumed in the former Spanish colonies of The Philippines and Mexico. Brandy Facts: In order to grow enough grapes to produce 80 million bottles of Brandy de Jerez annually, the equivalent of 80,000 football (soccer) fields of vines must be harvested. And, in order to produce one liter of brandy, it is necessary to distill four liters of wine.

How to Buy Brandy de Jerez

Top labels to look for for under €50

The brandy of Spain is a topic that can be (and is) discussed at great length. Unique house styles, length of aging, grape varietals, oak barrels and more all play a pivotal role in creating this prized, distinct spirit that has been swilled by gourmands and common drunks alike for centuries. Though Brandy de Jerez can be a product of the highest gourmet caliber, mixing it into a wide array of cocktails is not only permissible, it’s encouraged. Of course, when mixing a cocktail, the cheaper brands are usually passable, but, in most cases, adding your top-shelf (or second from the top-shelf) brandy to the shaker elevates your pleasure considerably. Some might consider brandy a winter drink, perfect as a neat pour or in toasty cocktails like a hot toddy, enjoyed after dinner chats around a glowing fire. However, prepare to fall in love with these year-round classics, even in the summer heat. Enjoy! Five Classic Brandy Cocktails

If you have Spanish brandies you enjoy, please share them!! We’re always on the look out for new libations to enjoy!