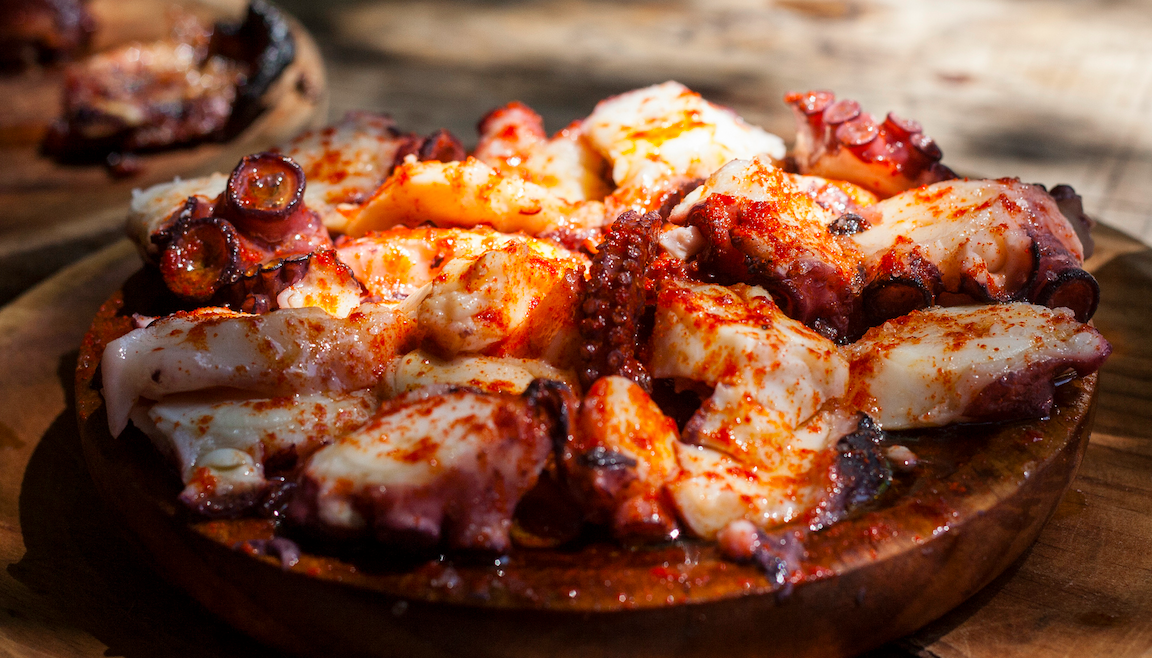 The city of Santiago de Compostela is really more of a town than a city. It’s small, yet bustling with university students, locals, tourists, and—of course—road-weary pilgrims soaking up the glory of a long road traveled. The Camino de Santiago is the city’s biggest claim to fame—a Medieval pilgrimage taken for centuries by Christians to the final resting place of Saint James. The “Camino” takes on many routes, depending on the starting place. A true pilgrimage begins at one’s home and ends at the Cathedral of Santiago de Compostela, though now, many people begin the trek from popular starting points throughout Northern Spain and South-Western France (beginning on the French side of the Pyrenees mountains sets the journey at some 800km). People take weeks or months to complete their pilgrimage and travel by foot, bicycle, or horse.

It’s hard to miss the fact that the city is now built around this tradition, as most corners in the historic city center are bursting with scallop shell souvenirs (the symbol of a pilgrim on the road). With a constant celebratory spark in the air (hundreds of pilgrims arrive daily in the high season) and a university environment (The University of Santiago was founded in the 16th century and is one of the oldest in Spain), Santiago de Compostela is full of energy.

Beautiful architecture and meandering medieval lanes make getting lost more an excitement than an inconvenience. As someone who prides himself on an excellent sense of direction, it pains me to admit: I got lost in the tiny center of Santiago de Compostela surprisingly easily. Make sure you bring along a street map, and trust in the friendly locals to point out the way. The people of the city gave off a warmth that was instantly apparent and made my experience all the richer.

Where to stay in Santiago de Compostela

I am a big fan of the “old quarter” of every city I have visit throughout Spain and Portugal. The charm of the narrow streets and cobble stones will never cease to steal my heart, so naturally I recommend finding a place in the center of Santiago de Compostela (on a map you can see the oval-shaped old city district, with the cathedral at its core). One place that is well located, very reasonably priced, and dubs itself as a “Gastronomic Hostal” is Casa Felisa. The simple and affordable accommodations are made even sweeter by Casa Felisa’s timeless, classic restaurant (see below).

If you are looking for more luxurious lodgings, there are none finer than at the Five-Star Hotel Parador of Santiago de Compostela. Built in 1511, the Hospital de los Reyes Católicos (Hospital of the Catholic Kings) later became the final lodge of the Camino de Santiago to house pilgrims at the end of their journey. Directly facing the towering Cathedral of Santiago de Compostela, the impressive structure is now a parador (luxury hotel within a historic building), and the location couldn’t be more central.

Where to Eat in Santiago de Compostela

Try the T-bone steak (chuletón), grilled fish, croquetas (ham croquettes), pimientos de Padrón (sautéed green peppers that are a typical “tapa” all over Spain but get their name from their place of origin; the nearby town of Padrón), and scrambled eggs with cured beef and peppers (revuelto de cecina y pimientos).

With its interior garden and heaping portions of Gallego classics, Casa Felisa is a favorite spot with the locals for a leisurely lunch with friends or family. The presentation is simple in the typical Spanish way, so it’s the sublime taste of a 800-gram T-bone of Galician beef for two—hot off the grill and sprinkled with crunchy sea salt—that has filled their gorgeous, interior garden terrace for decades.

These two bars are neighbors, just steps from the Cathedral of Santiago de Compostela. There’s a good natured rivalry between fans of these two classic bars; locals all have their personal preference. While the typical fare of seafood, cooked and cured meats, and meat pies are a sure bet, I often like to follow the lead of other diners and order whatever the locals are eating. It’s hard to go wrong here. These bars are far from glamorous, but when you are happily digging into a platter of fork-tender octopus, chased with a cold swig of the local Estrella Galicia lager, you’ll hardly notice.

Try the two tasting menus: one in the “Pub” section for €21 (six dishes inspired by the local market), and the other in the “Storeroom” for €35 (five tapas, then vegetables, fish, and meat, followed by two desserts). You can add a four-wine pairing for €10 more.

The Praza de Abastos (or Mercado de Abastos) is the central fresh market of Santiago de Compostela. It isn’t hard to deduce that the name Abastos 2.0 essentially alludes to an “innovation” on the original market cuisine of Galicia—version “two-point-oh”. The building itself dates back to the 1870s, and the contrast of the very old settings with the young, excited staff has earned Abastos 2.0 the somewhat dubious label of “Neo-tavern”. All of the different parts (Pub, Storeroom, and Private Dining) have separate contact numbers and emails, and reservations are a must. Menus change weekly, dictated by the seasonal products at the market that is just a few steps away. This restaurant is definitely worth checking out, and the price is hard to beat for such fresh, well-treated fare.

Pastelería Mercedes Mora: One of the oldest pastry shops in Santiago de Compostela.

Try the Tarta de Santiago (the most famous dessert of the city, made with egg, flour, and ground almonds), Bagoas de Compostela (Tears of Santiago; tear-shaped balls of almond and truffled chocolate), and Bombas de Crema (cream-filled pastry balls).

One of the oldest pastry shops in Santiago de Compostela, La Casa Mora was founded in 1925. Eventually, it was renovated and modernized in 2007 and re-named Pastelería Mercedes Mora. However, this little shop still holds its claim to being one of the best places to try classic (and modern) Gallego pastries! Beware of the dozens of varieties of vacuum-packed Tarta de Santiago that you find around the city. Quality comes from freshness and from prime ingredients. However, if you must take a tart home with you, the vacuum-packed one will do, just don’t miss out on tasting the real thing!

Where to Drink in Santiago de Compostela

Bar O Mosquito: Just a couple of blocks outside of the “old city”, this classic tavern also doubles as a shop, selling local gourmet products.

Licor de café is a perfect digestive to aid your stomach in processing the giant meal you probably just ate (portions in Galicia are rightfully famous for being often over-the-top). In addition to the coffee-flavored variety, a shot of just plain orujo, or the sweeter, herbaceous orujo de hierbas is also quite popular. The bar El Mosquito is literally on the Camino de Santiago (the final stretch runs along the city streets), thus the crowd is usually a mix of locals, students, and pilgrims. This bar is well-known for their licor de café, a home-made drink that they say tastes different in every bar or household in Galicia. At El Mosquito you can buy some to take home as well.

Vinoteca O Beiro: One of the oldest and most well-known wine bars in Santiago de Compostela.

Try the wine. Galicia has five Denominations of Origin for wine production. If you haven’t tried a full-bodied, expressive red from the region of Ribeiro (which is more famous for white wine), then this is a perfect place to experience it. Reds from Ribeiro are ripe, powerfully-tannic wines that go easy on acidity but big on the flavors of ripe red fruit. In the nose, creamy, floral aromas with just a hint of licorice make this wine a pleasure, paired with strong cheeses and cured meats. These unique reds have a low level or production and rarely leave Galicia, so if you enjoy it, pick up a bottle at the shop.

O Beiro is also a wine shop, and they have dozens of wines by the glass to choose from—red and white; Galician or other. The staff there is helpful in recommending a local wine based on the customer’s personal tastes, and you may very well be allowed a little sample before committing to a whole glass. If you want to experience a variety of wines from Galicia other than Albariño (which is great, but can be had all over the world), then Vinoteca O Beiro is a perfect option. They have a variety of typical tapas to accompany your wine as well.

Right off the tiny Plaza de Fonseca on Rúa da Raíña (just a couple doors down from O Beiro), the beer and specialty shop O Bandullo do Lambón is mostly a store, with a large, central, communal table where you can eat cured meats, cheeses, and artisan-canned seafood, accompanied by craft beers from around Spain and other parts of Europe. Galicia only has a handful of craft beers, and this bar pretty much stocks them all. All the beers at O Bandullo do Lambón come in the bottle, with the only draft beer being of the simple, “local lager” variety. You can buy the beer to go, or grab a cold one and savor it in the moment. If you fancy yourself a beer connoisseur, another must is the La Atlántica Beer Shop, with some 400 varieties of mainly Spanish craft beer to choose from. They also have a tasting room and hold special events from time to time.

Galician Craft beers to look out for:

Santiago de Compostela is small, a fact that you will quickly realize upon exploring the historic center. The Cathedral (one of the most beautiful in Spain and a UNESCO World Heritage site), the museums of Galician Modern Art, and the Pilgrims Museum are both well worth a visit, as are the historic University of Santiago and the beautifully green Alameda Park, with its excellent views of the Medieval city center. There is a lot to see in Santiago de Compostela, but the size of the city center makes it quite easy to take nearly all of it in in a couple of days. The Rúa do Franco, Rúa da Raíña, the Praza de Cervantes, and the Vía Sacra (check out university bar Casa das Crechas) are all lively places that you shouldn’t miss (but will almost certainly come across on your own).

Be wary, as many shops and business close on Sundays and Mondays, and the weather of Galicia is known to turn at a moment’s notice. Also, make sure you spread your meals out, as portions are big, and there is so much to taste! The locals are very happy to help the lost and the hungry in finding their way, so trust in the charming nature of the city, and save the dieting for another trip.