Where to Find the Best Carnival Celebrations in Portugal 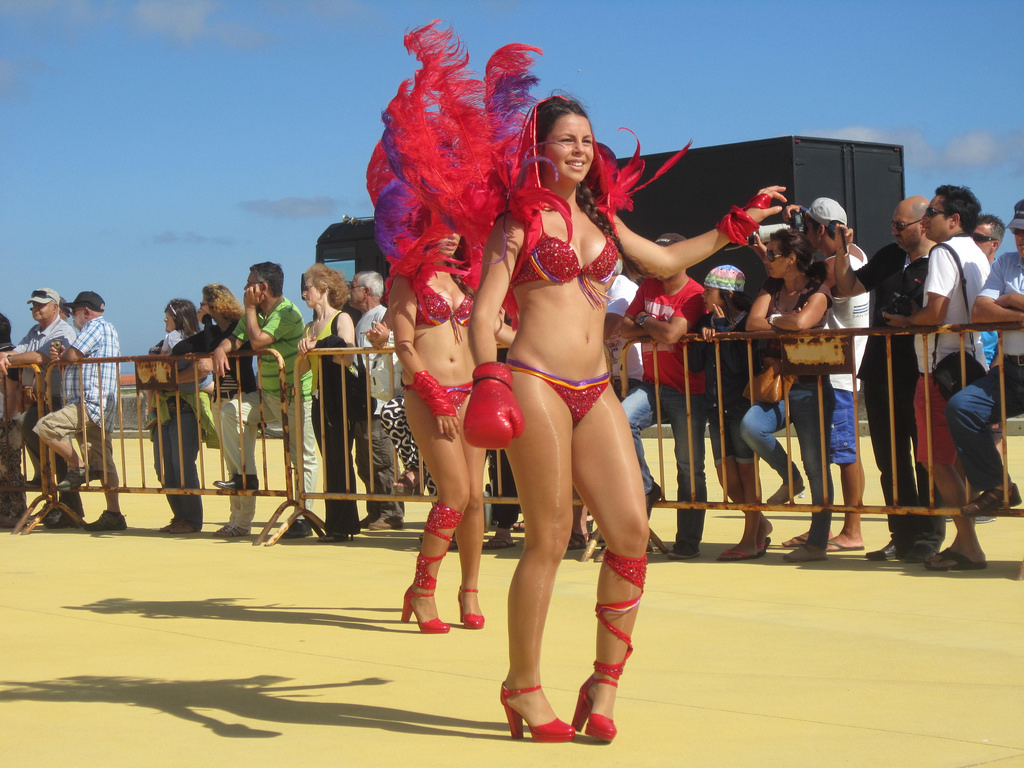 Carnival conjures images of brightly decorated floats, scantily clad dancing women, and a party that lasts for weeks on end, equivalent to New Orleans’ Mardi Gras. Of any other celebration, Carnival is beloved in Europe! (photo by Rosino)

But what is Carnival? Historically, during the six weeks of Lent, one was expected to be conservative in their behavior, which meant no dancing, no late night debauchery and most certainly no savory meats, fatty dairy, or sugar-laden sweets. But with so many enticing goods around the house, it’s almost impossible to “follow the rules”. Hence, the grand tradition of basking in pure, unadulterated gluttony, to prepare for weeks of humble piety.

However, while much of carnival rids the soul of “temptation” to adhere to the somber, pious time before Easter, some believe that its roots extend as far back as the pre-Christian times. In the northern part of Portugal, particularly in the Bragança district in Trás-os-Montes, those ancient traditions still exist and are involved in some of the most unique celebrations in the country. (photo by Rosino)

In the quaint northeastern village of Podence, caretos spread across the cobblestone streets looking to cause mischief. Famed for their rainbow costumes, with elaborate masks made of leather or wood, they’re impossible to miss. Imagine a muppet crossed a clown, and you’ve found one! On Fat Sunday and Shrove Tuesday, Caretos roam the remote city streets to play tricks on the populace, while targeting young women with their antics. It’s a social agreement to create impromptu fun and humor whenever the moment arises.

A little further south in the northern Douro region, Lazarim follows the age-old tradition of rustic fare, bonfires, primitive masks, gender wars and a dash of social satire. Here, Carnival gets a much earlier start on the party planning, equalling five weeks in total.

On the first Sunday, friends gather to feast on pork and parade their gigantic sculpted heads throughout the town. The following Sunday pertains to female friends and is succeeded by the Sunday of Compadres (“godfathers”) and Sunday of Comadres (“godmothers”). Over the 5 weeks, the compadres will assemble the large masked heads, while the compadres will fundraise to pay for the mannequins that will become effigies in the bonfire on Shrove Tuesday. On this day, a child of the opposite sex will read each of the wills containing: the executors of the will; the heirs of the bequeathed donkey, and the final reckoning when the Entrudo (mannequin) is burned; thus ending the Carnival. (photo by Alfredo Miguel Romero)

Just an hour north of Lisbon in Torres Vedras, you’ll find what is known to be the most traditional Carnival celebration in Portugal. Here they’ve kept the original practices that were set in place in the thirteen century despite a brief break from 1937 (due to World War II) until 1948 when it was restored. This city is known for its matrafonas (men masqueraded as women) and cabeçudos (giant heads) as well as its parades that include floats and Zés Pereiras drumming groups. The festivities last five days and include an annual theme. 2015 will celebrate “Love” – appropriate timing for Valentine’s Day.

For a more modern take on Carnival, visit Estarreja, Ovar, Mealhada and Sesimbra. Here you can find a celebration with parades that are vibrant, spirited and full of the jovial pageantry you’d expect during carnival. Woman dance atop floats and through the crowds in costumes that shimmer, sparkle and leave little to the imagination. Lively Samba music is often played as costumed revelers move through the streets, enjoying the three-day-long party. You might also stumble upon alternative groups to samba schools, such as the “passarelles” and “apeados” who use satire to critique current affairs at a social or governmental level. (photo by Pepe Martin)

In the southernmost region of the Algarve, you’ll find the oldest continuously running Carnaval in the country. Celebrating 100 years, Loulé lays claim to one impressive party! Here they flaunt parades with floats, samba groups, dancers and, the ever-present and enjoyed, giant caricatures that roam the streets.

With so many different celebrations all over the country, much like Carnival in Spain, no one can see every version of Portugal’s Carnaval. As a country full of enthusiasm for its cultural heritage, from north to south, ancient to modern I’d say it’d be a shame to not take the time to attend each celebration and raise a glass, feast and enjoy what Portugal’s Carnaval has to offer year after year!

Book a trip with Catavino to learn about the local culture