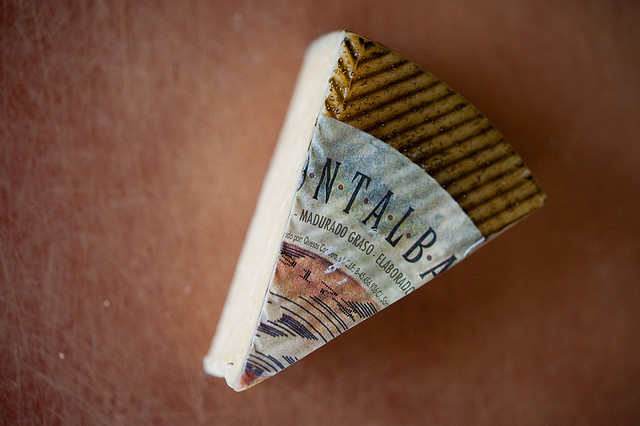 Our journey has taken us through mountainous terrain and spacious pastures; it has introduced us to the sprightly goat, the demure cow, and the helpless sheep. We have also eaten some of the most amazing cheeses produced in the world today. Our final gaze turns to those cheeses produced from a combination of two or three of these animals.

Greater than 50% of the cheese produced and consumed in Spain is made from a mixture of cow’s, goat’s, and/or sheep’s milk. The largest quantity of the milk comes from cows with the other two being blended in to shape the outcome of the finished product. Typically, the greater the amount of the cow’s milk the more simple and less expensive the cheese. Cow’s milk is added for mass and flavor, while goat’s milk adds whiteness to the color as well as a tangy and tart flavor. Finally, sheep’s milk normally provides more flavor and richness to the cheese.

Mixed milk cheeses are produced primarily in Central Spain and Asturias (the north-central area near the coast) with a few cheeses produced around Cataluña, along the Eastern coast (the Levant), and among the Canary Islands. In 1987, in an effort to standardize some incongruent practices, the Ministry of Agriculture set regulations for three mixed-milk cheeses: Hispánico, Ibérico, and Mesta. These regulations designated the minimum milk content for each of the three cheeses. Ibérico is the best known and most widely consumed in Spain (I have only seen Ibérico in the U.S.).

This cheese tasting was a bit more unique than the others. Although the single variety cheeses provided diversity amongst the types, the mixed milk cheeses exhibit a vastness of depth and character that only cheeses produced from a variety of milks can turn out. Our tasting takes us from the light and savory Taramundi to the depths of flavor experienced in the Cabrales blue-veined cheese. Five absolutely wonderful wines accompanied these cheeses and all provided extremely enjoyable and delicious pairings. Bring along a hunk of crusty bread and sliced fruit and sit back and enjoy, or join us on a customized Cheese Tour of Spain!

Ibérico: Produced in Central Spain (and D.O.P. designated), Ibérico is a pasteurized hard cheese closely resembling (and often mistaken for) Manchego. By law, it must be made from a minimum 50% cow’s milk, 30% goat’s milk, and 10%, sheep’s milk. It is aged for roughly six to 12 months and has a light yellow color this slightly oily in texture. Ibérico is mild, yet aromatic, exhibiting the softness of the cow’s milk along with the grassy and herbaceous notes of the sheep and goat milk. It is a great all-around cheese which paired nicely with all of the wines.

Campo Montalbán: Much like Ibérico, Campo Montalbán is a blend of the three milks. This cheese was actually considered Manchego (which contains only sheep’s milk) up until 1985 when the regulatory board decided to designate Manchego unique status. It has a very similar look, but the taste is quite different because of the blend of the three milks. Semi-firm in texture and aged for three months the cheese has a slightly tangy and buttery essence. As with the Iberíco cheese, the Campo Montalbán also paired nicely with all five wines. (Flickr photo by jlastras)

Taramundi: A blend of cow and goat milk, Taramundi is a semi-cured artisan cheese hailing from the remote mountains of Asturias. Produced for over 1000 years, Taramundi is cured for a minimum of 60 days. The cow’s milk adds a buttery texture and taste as well as helping to keep acidity at low levels. This cheese is not spicy and has toasted hints alongside fresh, country meadow flavors. The Taramundi paired beautifully with the two white wines and the lighter red wines (La Nevera and Chateldon).

Valdeón: Produced in the Picos de Europa Mountains in Castilla y León from either pasteurized goat and sheep milk or cow and goat milk, Valdeón is a pasty, fatty blue cheese. It is the milder of the Spanish bleu cheeses and is rich and creamy with a hint of tang and sweetness (partly from the chestnut leaves in which it is wrapped). This cheese is made year-round and is an extremely aromatic cheese. Valdeón is has lesser intensity due to the fact that the caves in which is ages are slightly drier. Valdeón also carries a D.O.P. designation. In addition to the cheese itself I was also able to taste a Crema de Queso Valdeón. This cheese was perfect on crusty bread or sliced fruit. I particularly like the two Priorat wines and the Penedés red with this cheese.

Cabrales: The King of the Spanish blues, Cabrales is also produced in the Picos de Europa Mountains in eastern Asturias and carries D.O.P. status. Made with cow’s milk and either or both of goat and sheep milk, Cabrales is the best known of the Spanish blue cheeses. The cheese is slow-aged in cold, damp, and humid caves. They are turned periodically during this process until the entire wheel has been grown with mold (naturally). This process normally takes a minimum of two months. I was also able to enjoy a Crema de Cabrales with is a creamed blend of Cabrales cheese and Asturian cider. This cheese was also incredibly paired with the Priorat wines.

This was an extremely enjoyable pairing due to the considerable diversity of both the cheeses and wines presented. Five wines (two white and three red) accompanied the tasting and each provided a unique and delicious experience. I would highly recommend any of these wines.

2009 Ochoa (Navarra): {70% Viura, 30% Chardonnay} From the vast wine-producing region of Navarra comes this wine fermented in stainless steel tanks. Light straw in color, this wine is very aromatic on the nose with smells of melon, tropical fruits, and stone fruits. Medium-bodied and dry, the Ochoa has a medium finish. This light and crisp wine paired particularly well with the earlier cheeses in the tasting.

2009 Odysseus Garnatxa Blanca (Priorat): {100% Garnacha Blanca} Sylvia Puig (the winemaker) has hit a home-run with this wine. Pale yellow in color, this wine exudes aromas of pear, citrus, melon, and minerals. On the palate one tastes stone fruit, ripe apple, and minerals followed by a long finish. Crisp and lightly acidic I must admit this wine (previous vintages as well) is one of my favorite wines. Always consistent, this wine is a crowd-pleaser. (Photo by Rick Fisher)

2008 La Nevera (Navarra): {100% Garnacha} Produced from 60- to 80-year-old vines this Garnarcha-based wine is fermented in stainless steel tanks with no oak aging. Aromas of fresh red and black fruit and a bit of smokiness fill the nose and lead to similar on the palate, specifically raspberry and blueberry. Smooth on the palate with a medium finish.

2003 Chateldon Reserva (Penedes): {100% Cabernet Sauvignon} This wine was quite enjoyable to see a Spanish expression of the single varietal Cabernet Sauvignon. Deep red in the glass with aromas of dried fruit and oak, this wine has a delightfully smooth mouthfeel with flavors of jammy preserves and hints of oak and white pepper.

2008 Akyles (Priorat): {40% Garnatxa Negra & Peluda, 45% Cariñena, 15% Cabernet Sauvignon} This wine is a powerhouse and I absolutely loved it. The fruit is hand-harvested and after fermentation is left in the same barrels and aged for anywhere from 10 to 12 months. This wine is deep crimson in the glass with scents of blackberries, spice, and toffee which lead to flavors of predominantly black fruit laden with minerality. It is extremely well-balanced with mature tannins. Another hit for the Puig family of Priorat. This wine paired particularly well with the stronger cheeses.

Where to find Spanish Mixed Cheeses

Well, our journey throughout the Spanish countryside is over. I would be remised if I did not thank the many artisan cheese-makers throughout Spain who tirelessly continue the craft and produce some of the world’s finest cheeses. Of course, we cannot forget the goats, sheep, and cows that give their milk so freely (not that they have much choice). To them the world will be forever in debt. Now celebrate Spanish cheese by visiting your local cheese shop and selecting a variety to taste alongside any of the incredible wines described throughout our series.