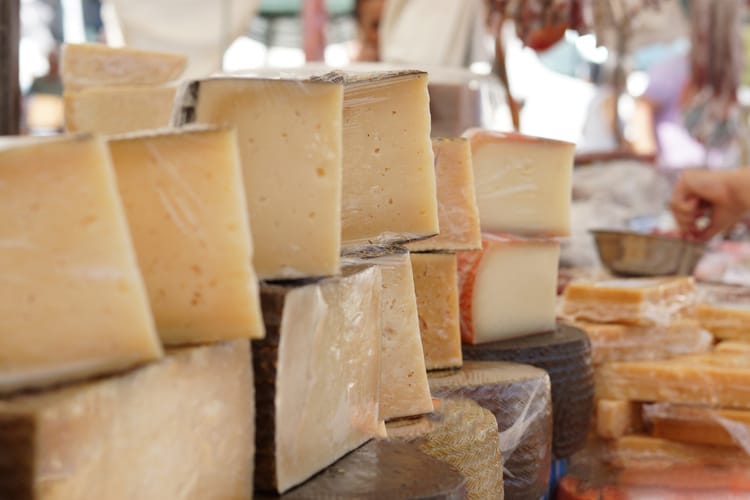 Our gallivants through the pastures of the Iberian countryside now turn our gaze from the quiet and inert cow (vaca), and the rambunctious goat (cabra) to the timid and vulnerable sheep (oveja). I might even say that I am thankful for the animal’s reputation of stupidity – follow the shepherd and eat and drink to your heart’s content for the world is craving the product of your delicious milk. Sheep’s milk cheese is fashioned virtually all over mainland Spain but production is particularly heavy in the mesetas of Central Spain. The Northern and Southern Plateaus also turn out a number of cheeses with Extremadura, Navarra, Asturias, and Pais Vasco producing their own unique cheeses.

The Meseta (Central Spain) exists in an (imaginary) circle around Madrid with a radius of about 250 miles (402 km). The area is a high plateau, situated about 2000 feet above sea level and surrounded by chains of mountains. Three of Spain’s primary rivers – the Duero, the Tajo, and the Guadiana – interlace throughout the area. The area is also characterized by an extreme continental climate (think of the wines from this area). It is here that the sheep producing Spain’s undisputed Master of Cheese roam.

Castilla-León is primarily the Northern Plateau of the Meseta and home to two main breeds of sheep: the Churra and the Castilian. Likely the most famous of all cheeses made here is Zamorano (made from the Churra sheep). Others produced here included Castilian cheese (similar to Zamorano but made primarily from the Castilian sheep). This area is also home to three other (much lesser-known) cheeses: Burgos, Bureba, and Pata de Mulo. (Photo by Ovinos)

The Southern Plateau (now known as Castilla-La Mancha) is home to the Manchegan sheep. Manchego cheese is produced in six provinces in the region only from sheep of the Manchegan breed. For the most part, the cheese produced here is a bit spicier and saltier, yet milder and full-tasting, than those produced in the Northern Plateau due to the drier environmental conditions experienced here.

While the vast majority of sheep’s milk cheeses are produced in the Meseta, other areas of Spain have their own signature cheeses. In Extremadura (the southwest of Spain) two (incredible) artisanal cheeses are produced: Torta del Casar and La Serena. To this day, these cheeses from the Merino sheep are hand-made with raw milk. In Pais Vasco (northern Spain) the Latxa sheep produces another raw sheep’s milk cheese – Idiazábal. In nearby Navarra, Latxa or Aragonese Rasa sheep produce Roncal cheese while in Asturias (to the west of Pais Vasco) Quesucos and Serrat cheeses are made. Finally, two more obscure (at least for those outside the country) cheeses are produced in Andalucia: Calahorra and Grazalema.

I must admit that (other than my goat’s milk cheese experience) I was really excited about this tasting. For turophiles, Spain is home to the world’s finest sheep’s milk cheeses. The high praise is well deserved. Five types of cheese adorned the board for this tasting: Manchego, Zamorano, Ovin, La Serena, and La Leyenda. Two accompaniments (other than some fine wines) were enjoyed alongside (and on top off) these cheeses: Mandarin marmalade and dried fig compote. This was an extremely pleasurable and memorable tasting and one I would gladly repeat.

Manchego: Gaining “Denominación de Origen Protegida” (D.O.P.) status in 1984, Manchego is the best known and most important cheese produced in Spain. Recognized by the zigzag pattern on the rind (created by esparto grass molds used during the curing process), this cheese is produced only from the milk of the Manchega sheep. Manchego is made from pasteurized or unpasteurized milk; and it is aged, ranging from semi-cured to cured. This aging process is conducted in high humidity natural caves for a minimum of 60 days. The Manchega sheep’s milk has higher fat and protein than other milks as well as more solids (and less water) than cow or goat milk. As for taste, Manchego Curado (aged less than six months) is mild and smooth with a nutty, creamy texture. Manchego Viejo (usually a year or more old) is more solid and more crumbly with a sharp, intense, and somewhat peppery flavor. Top sliced Manchego with dried figs, marmalade, or other fruit. This is truly an amazing cheese. (Photo by Spanish Food Co)

Zamorano: Hailing from Castilla-León, Zamorano (another D.O.P. cheese) is produced from the Churra and Castellana breeds. It is an aged cheese, ranging from cured to very cured. The cheese is salted by immersing it in dense, highly salted water for a minimum of one day and left to age for approximately three weeks at a mild temperature and then left for at least six months in cold, humid caves where mold forms on the rind. Straw yellow in color, Zamorano has an intense, yet not strong, sweet, and savory flavor which is slightly tangy and buttery with a bit of a nutty aftertaste. Saltier in taste than Manchego, this cheese (the “very” cured one) reminds me of a good Parmigiano-Reggiano.

Ovin: A rare cheese from Nava (Asturias), Ovin is an artisan cheese crafted from local sheep’s milk and cured for a period of 30-45 days in small wheels. It has a somewhat elastic texture with a golden color. Lacking the sharpness of other cheeses one is able to experience the full, fresh flavor of the sheep’s milk. Ovin has a mild, creamy, buttery texture. Ovin also makes cheeses with cow’s and goat’s milk.

(Queso de) La Serena: Made from the unpasteurized milk of the Merino sheep, La Serena was my guilty pleasure of the tasting (with about 50% fat content). Coagulated with cardoon (artichoke) thistle, this disc-shaped cheese ages for a minimum of eight weeks and once you saw off the top and lop out a scoop of the gooey interior (onto a hunk of crusty bread) the thick, buttery texture tends towards a vegetal – even somewhat tart – taste. The most difficult of all the cheeses to pair, I would recommend a crisp, fresh white wine or a lighter, fruity red wine with this delicious cheese. (Queso de la Serena is also a designated “D.O.P.”)

La Leyenda: This cheese hails from La Mancha (central Spain) and is produced from raw sheep’s milk cheese which is aged for a minimum of one year before it hits the shelves. Rubbed with Spanish olive oil and fine herbs, the cheese is then soaked in solera brandy (or sherry) for roughly four to five days prior to the one-year aging period. Firm in texture, this mild cheese has a buttery, nutty flavor enhanced by the brandy and herbs. This cheese pairs well with white wines on the sweeter side and fruit-forward reds.

The sheep’s milk cheeses in this tasting provided a tremendous array of flavor profiles and were quite fun to pair with some incredible Spanish wines. Five wines (two white and three red) found their way to the table and paired wonderfully with any number of the cheeses. I would highly recommend any (all) of these wines.

2008 Mireia (Penedés): {Muscat, Gewürztraminer} This is one of the most interesting wines I have tasted from Spain. A blend of two un-Spanish varietals, the 2008 Mireia is a bright, pale yellow in color and offers heavily aromatic fruit notes on the nose. Tropical fruits and floral notes expand on the palate and provide an intriguing taste. This wine paired best with the cheeses with the most robust flavors, especially the La Serena and the La Leyenda. (photo by Rick Fisher)

2009 Blanco Nieva (Rueda): {100% Verdejo} Produced from vines greater than 30 years old (50%) and those 10 to 30 years old (50%), this crisp (almost bone-dry), fruity, and aromatic white wine from Rueda paired extremely well will most all of the cheeses tasted. Herbaceous and minerally on the palate, this wine finished with just a hint of sweetness. An excellent overall wine.

2003 Torremilanos Crianza (Ribera del Duero): {100% Tinto del País (Tempranillo)} Harvested by hand, this delicious wine shows cherry red in the glass with aromas of red fruit, toasted oak, and vanilla. Full and smooth on the palate, the flavors of red fruit and oak work together in harmony. A truly enjoyable wine.

2009 Viña Tobia (Rioja): {100% Tempranillo} The grapes used to produce this young, unoaked Tempranillo are picked by hand in Rioja Alta. On the nose aromas of raspberry, cherry, and licorice perfume the air while flavors of black raspberry and black licorice tempt the palate for yet another taste of this medium-bodied wine. This was a deliciously fruity and young Tempranillo and a joy to drink.

2004 Conde de Jauregui Reserva (Rioja): {75% Tempranillo, 15% Garnacha, 10% Mazuelo} One of the best all-around pairs for the cheeses tasted, this Rioja blend is bright cherry red in the glass. Intriguing aromas of red, blue, and black fruits couple with spice and tobacco to create an inviting nose. On the tongue, flavors of like fruits and licorice round out a beautifully full and round wine with a medium finish. This wine was aged in American oak for a period of 18 months.

Where to find Spanish Sheep Cheese

This was a tremendously enjoyable tasting. I am a huge fan of sheep’s milk cheeses and was vaguely aware of the sheer variety of cheeses available on the US market. One cannot discount the importance (and deliciousness) of Manchego, but it is certainly worth the effort to seek out the others. As we prepare for our final article on mixed cheeses, gather your friends along with a selection of your favorite Spanish cheeses along with some amazing Spanish wines and enjoy!