Part II: An Ode to My Three Grandmothers and Their Portuguese Stories 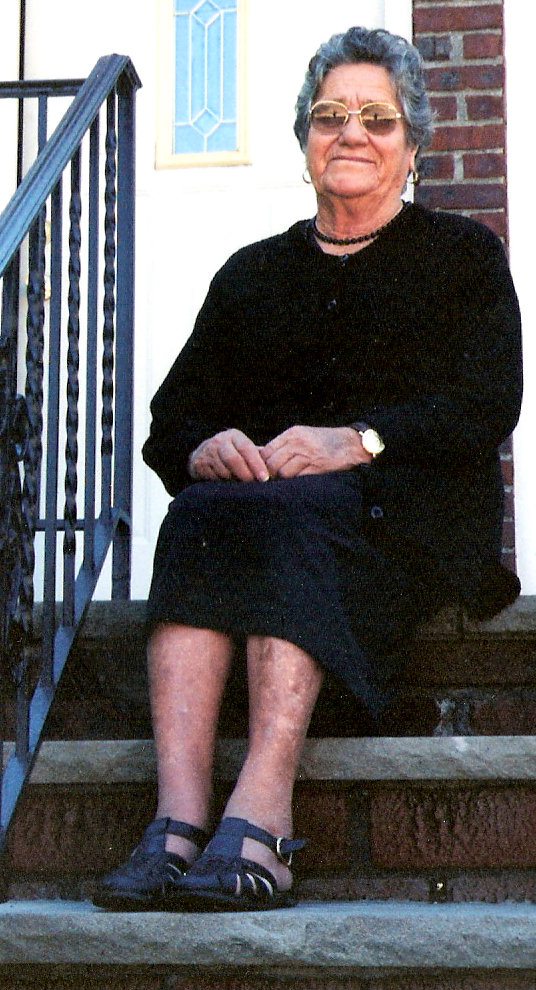 Editor’s Note: In this three-part series, Sonia shares memories of her three grandmothers in Portugal. How they influenced her curiosity about the country and its culture—in hopes that they’ll also inspire you to continue exploring Portugal, or discover it for the first time.  Read Part 1 here.

On my hunt for “Pao de Lo de Ovar,” I walked the city of Ovar (new to me) alone, while my then 89-year-old grandmother (Avo Maze) waited patiently with my husband at an esplanade (open space). I passed ornate buildings with alluring tiled facades that beckoned closer inspection; but I forced myself to focus on my mission. The mission: spongy cake with an egg-cream center. I had heard the best was at a place called “O Sao Luis.” With help from the friendly locals I stopped to talk to and ask for directions along the way (all with characteristic northern accents), I finally reached Sao Luis.

A small shop specializing in Pao de Lo de Ovar, I asked a tall, lanky elderly man (I presumed that he was Saint Luis, but wasted no time with chit-chat since my grandmother was waiting) for two cakes. Saint Luis handed me two pretty blue and white boxes, a design surely influenced by Portugal’s traditional mosaics–and I was off.

That same day, we treated my grandmother to lunch at Oxala restaurant. A true fish and shellfish lover’s paradise: I had codfish and my husband and grandmother shared a gigantic bass. My grandmother was so amused with the extremely large wine goblets on the table—practically the size of her head, she insisted we pour a few drops of red wine in her glass. We sat enjoying her company and her recollections, which sounded as if she were simply thinking aloud.

Though she moved to Lisbon as a child to live with an aunt (then to Angola as an adult and back to Lisbon again), Avo Maze was born in the Ribatejo region of Portugal, more precisely Tomar. I have never been to Tomar, but it calls to me because of my grandmother as well as the location’s historical significance. It’s a place packed with ancient mysteries, most notably its Templar connection and the country’s Order of Christ, which conspiracy theorists claim is the successor organization to the Templars in Portugal. There’s also the annual “A Festa dos Tabuleiros” One day, I will visit and tell you more about it, or if you visit before I do, please share.

During her younger years, Avo Maze canvassed Portugal from North to South. She encouraged me to continue doing the same. “Our small country is beautiful,” she would utter from the back seat (she insisted I always sit upfront with my husband, “that’s where you belong,” she would say) as we drove from place to place. In addition to Angola and Spain, Avo Maze had also visited America when I was about nine, a trip she also liked very much. But for the last 13 or so years of her life, she wished only to be in the Beira Baixa where she had spent those last few years with my grandfather before his passing. It’s incredible to me that today her final resting place is in the Beira Baixa—the region that for most of my life I only associated with my maternal grandmother, Avo Isaura. Today, both their resting places are in this region—Avo Isaura in Bemposta do Campo  and Avo Maze in Pedrogao de Sao Pedro. Life can indeed surprise you.

Unlike my well-traveled Avo Maze, my Avo Isaura spent her entire life in the Beira Baixa region. She moved from village to village until settling in my beloved Bemposta do Campo. There she raised eight children (she had 12, but four died at a very young age) while my grandfather spent nearly 30 years working in France, visiting the family once or twice a year. She was a true country woman, dedicated to tilling the land and tending to her animals. Like so many people those days, she was illiterate. But that didn’t stop her from being the savviest of business women, selling farmed goods at local fairs and making wise real estate deals on her own. These were the same real estate deals that granted all of her eight children a piece of property in Bemposta do Campo. My mother inherited a piece of land—the “Horta” to the family—where my grandfather had a small vineyard, fruit orchard and an olive grove; where a boisterous brook rushes through in spring and where the same stone cottage still stands. It’s where I played as a child with my many cousins, and where I “secretly” dream of returning to one day to make wine and olive oil (One can dream …). There are so many things I would have liked to tell my Avo Isaura today, but I was barely 20 when she passed away, and back then, like most people at that age I didn’t always know how to fully express what I was feeling.

Though my Avo Isaura wasn’t an ace in the kitchen her six daughters turned out to be excellent cooks, partly due to the fact that they were often in charge of the household while their mother worked in the fields. What my grandmother lacked in culinary skill, she made up for in producing liquid gold out of olives, smoking a variation of sausages (including chourico) after the “matanca do porco” (the pig slaughter), and making cheese from the milk that her large herd of sheep and goats supplied. To make the cheese, she would sit on a small stool with a wooden bench directly in front of her. On it sat a circular metal mold, which she hovered over, shaping the curd into a cheese wheel. Her weather-beaten and wrinkled hands gently pressed down on the curd as excess milk squeezed through tiny holes in the mold and into a basin. It was as if she were transformed from farmer to sculptor. Like wet clay, the milk drenched her hands and dripped down her skin. This was her art.

A couple of years before my Avo Isaura passed away she got on an airplane for the first time in her life; she was 79 then. We made that trip to America together after one of my vacations to Portugal. There were several firsts for her on that trip. In our home in New Jersey, we taught her how to write her name for the first time. She was eager to learn and practiced nearly every day. She bought pants at Sears (a big deal for someone always in a skirt). She had a birthday in America for the first time; she celebrated her 80th with us. And, she saw the Manhattan skyline live for the first time. She visited my family in France after that trip, and soon after she had a stroke that eventually led to her passing. Those last few years were difficult for all of us—it hadn’t been that long since my grandfather had passed too. Until this day, when I get to Bemposta do Campo and walk up to my grandmother’s blue metal door, I swear I can still hear the chime it used to make when we opened it to find her inside with a warm smile. My mind still fools me into thinking that if she’s not home, then she must be in the “Chao,” (Floor) which is what my grandparents called the field nearest to their home. Unfortunately, reality sinks in and I know I won’t find them there—only the images the “Chao” evokes for me.

Nestled in the lower-central, interior region of Portugal, there’s much to discover in the Beira Baixa. A place that seems forgotten at times, constantly fighting for survival—and then in spite of the challenges most of the interior of Portugal faces, surprising with some success stories. It’s a place where nature lovers, history buffs, gastronomes and winos can all find what they need in one spot. Fossil trails filled with moss-covered boulders the size of houses, snow-covered mountains and watering holes, castles and stone cottage-peppered villages, medieval festivals and college towns, wineries, cheese, olive oil and bread museums, dirt-cheap rural houses, charming hotels and pousadas, all converge in this one place oozing with undiscovered authenticity, two hours or so from the country’s main hubs of Lisbon and Porto.

On my Avo Isaura’s rare jaunts to Lisbon (usually for a wedding or a baptism), she couldn’t wait to return to Bemposta do Campo. She would get car sick every time and suffer from an ongoing headache, which only dispelled when she stepped foot in her village. The land and the animals were her joy. She would happily give up the comfort of her bed for a daughter or son, and sleep in a hay bed she and my grandfather had ready in their barn. The closer she could be to nature, the better. She taught my mother that the ideal time to water crops was at the crack of dawn and at dusk—and everything my mother touches grows. On my visits to the village, I would only wake up by late morning. By that time, my grandmother had already been in the fields for hours. She would leave me bread, milk, coffee, cheese and a homemade cake on top of the kitchen table for breakfast. If I was there without adult supervision, she would stop by around lunchtime to check on me. Otherwise, she would generally only return home again at dinnertime. But in between, my cousins and I would normally stop by to see her. We would walk many country miles to get there, which journeyed by jovial children never seemed to take very long. Or, sometimes my grandfather would come pick us up at home on his carriage, pulled by a muscular horse when he was younger and eventually as he aged an easier-to-handle donkey. Those horse and buggy (my grandparents’ sole mode of transportation) trips were usually to the “Horta” (the land my mother inherited), and once there, we would spot my grandmother in the distance. Wearing a dark kerchief that fastened at her chin and topped with an old fedora, she would welcome us with a wave of her hand. When I visit the “Horta” these days, her image in the distance still greets me. And though I’m passionate and curious about Portugal in general, part of my soul will always belong to my Avo Isaura’s Bemposta.

I can’t help get all romantic about it, thinking that clearly it’s my fate (my Fado) to return to where my roots lie. It clicked for me one day, realizing how it all suddenly made sense: my birth certificate says that I was born in Lisbon, but that I am “natural” of Bemposta do Campo (another long story … ). The combo couldn’t make me happier.

In part III, we’ll take a trip through Africa-influenced Portugal with my Avo Ermelinda and more.