17 Stars in 2014: Portugal’s Haute Cuisine Continues to be on Michelin’s Radar 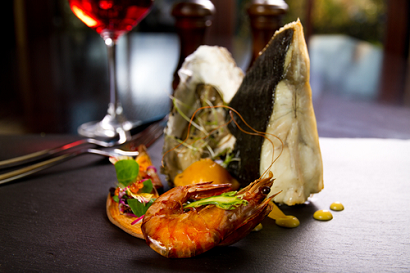 One of the top things I like to do when I’m in Portugal is stop in at a local “tasca” for a home-style meal. As a matter of fact, I have a new favorite tasca called Tascardoso in Lisbon’s Principe Real neighborhood where I recently spent a week. Our airbnb host recommended it. But even if he hadn’t, the tight quarters, rugged walls, bursting conversation and “Iscas em cebolada” on the paper menu glued to the window would have caught my eye. “Iscas” (not to be confused with “Iscas de bacalhau,” which is cod) is a meal of thinly-sliced liver and onions sautéed in a wine sauce. It’s not easy to find at somewhat more expensive restaurants. It’s Portuguese comfort food. But for the non-Portuguese passing through unguided, chances are that menu—which featured other comfort foods like “pescada frita com arroz de tomate” (fried hake with tomato rice) and “sopa de agriao” (watercress soup)—wouldn’t mean much. Should it mean something? I would say, yes. Even if liver isn’t your thing, there are other typical meals visitors are missing out on because they’re not aware of Portugal’s full range of food options. There’s lots to love about “bacalhau,” “sardinhas,” “cozido a portuguesa,” “caldo verde” and “pastel de nata,” but there’s also absolutely more to Portuguese cuisine. Unfortunately, proper promotion and education about Portuguese food hasn’t been a priority over the years. But that’s changing as the country’s rising Michelin-star chefs (and others in the sector) have been digging into Portugal’s culinary roots to revive and reinvent traditional dishes that capture a food enthusiastic audience. And thankfully, their efforts continue to be recognized. This year, Michelin awarded 14 Portuguese restaurants with stars—three of them receiving two stars.

These chefs are taking this food fight seriously, and slowly they’re putting Portuguese cuisine on the world stage. They’re the culinary world’s agents of change battling a complacent approach to promoting Portuguese gastronomy. I’m pinning the problem mostly on years of vulgarizing Portuguese food for the sake of selling a simplified message. I blame it on fear as well. I would venture to say it’s not only a fear of dissecting a complex culinary heritage, but one thats increased by an already-existing confusion about the country’s identity. It hasn’t been uncommon to hear folks clump Portugal into Brazil (ironically, Portugal has majorly influenced Brazilian cuisine) or Spain. Therefore, this fear is a tad understandable considering how vast and fusion-based Portugal’s gastronomy is especially for a country of its small size. Mediterranean alone can’t quite cover it, right …

The ultimate vulgarization happens at uber-touristy restaurants. Though there certainly are exceptions (Solar Dos Presuntos and Pinoquio would be two for me), Lisbon’s “Portas de Santo Antao” and “Rua Augusta” restaurants, for example, tend to promote meals they assume the tourist is already seeking out. They bet on the sure thing, and worse, normally serve up less than stellar versions of Portuguese staples. These watered down and redundant menus have done a poor job of illustrating Portuguese gastronomy’s quality, richness and diversity. Until Chef Jose Avillez (the ultimate agent of change!) began raving about “peixinhos da horta” (little garden fish: frittered string beans) to the food world, nobody talked about them outside of Portuguese homes. But they’re commonplace in Portuguese cuisine (akin to tempura vegetables, a technique the Portuguese are said to have introduced to the Japanese). They’re usually served as a finger food or as a meal when accompanied with tomato rice—an ideal vegetarian dish. The Portuguese meat or vegetable pie, the “Empada” (not the same as “Empanada”) would be another good example. It’s not enough to say we’re diverse, we have to show it! And these chefs are doing that well; they’re finding inspiration in the best and most interesting that Portugal has to offer. They’re bridging and elevating regional grandmother and island cooking with Age of Discovery and colonial-era influences that span Africa, Asia and South America. In Portuguese cuisine, you’ll find traces of the Arab world, Angola, Mozambique, Cape Verde, China, Brazil, India and others melded into a Mediterranean base. Combine that with top-quality domestic ingredients including some of the best seafood, olive oil, cheese, bread and wine in the world, and there’s much to be excited about. It’s no wonder these chefs are inspired! Chef Avillez’s video captures a bit of the essence of this culinary renaissance, see it here

And so, it’s time to toss yesterday’s message out the window. It certainly hasn’t helped conquer food lovers enough to make Portugal their top foodie destination. And let’s face it that most travelers these days are also demanding foodies. Though there are glimmers of hope, Portugal still remains all too often a stop on the way to somewhere else … Yesterday’s message that Portugal’s food is solely rustic and simple has compromised the complexity of its culinary heritage. That’s why we have to embrace what’s happening in Portuguese haute cuisine today to cook up a successful future for all of Portugal’s cuisine tomorrow. These haute cuisine chefs aren’t only whipping up pricey, extravagant meals, they’re stirring up worldly conversation about Portuguese food in general. And not only! They’re also contributing to the rise of Portuguese pride—something we need much more of. That’s why we at Catavino couldn’t be prouder and more thrilled to congratulate this year’s Michelin-star restaurants and chefs! In their hands, we’re sure this is the mere beginning of Portugal’s culinary renaissance.

The elevation of Portuguese cuisine isn’t only happening in Portugal. It’s also happening in one of the most influential cities in the world—New York City. Amid a melting pot of food options, there were (until about five years ago) only two well-known Portuguese restaurants in Manhattan—Alfama (in operation for 12 years or so; now closed) and Pao! (going strong with an authentic menu).

In 2009, an entirely different type of Portuguese restaurant came on the scene. A young Portuguese-American chef, George Mendes, opened Aldea in Union Square. Not a full-fledged Portuguese menu, the Michelin-star chef maps out meals according to his worldly influences. His culinary stints at Spanish and French restaurants paired with his Portuguese-American roots are evident. On my visit, I ordered the ultra-traditional “arroz de pato” (duck rice), but was pleasantly surprised to find candied orange peel and molecular green olives on the plate. My taste buds danced that day … This fall, Mendes released a cookbook called “My Portugal”—a sign of confidence in Portuguese cuisine. There are rumors, too, that he’ll be opening up a second restaurant in NYC. Since Aldea (a take on village in Portuguese, “aldeia”) opened its doors, Louro by another Portuguese-American chef, David Santos, has popped up with delightfully quirky themed menus. There’s even a fun and funky sandwich shop, City Sandwich, which combines the chef’s love of Lisbon and his Italian background to create memorable sandwiches (I’m still dreaming of the “Henrique,” stuffed with “alheira” and collards).

A play on the Portuguese and Chinese connection (Macao was a Portuguese colony until the early 90s), Macao Trading Co. is a whimsical option. Over the Brooklyn Bridge, there’s also Convivium Osteria, which combines the owners’ passion for Italy, Portugal and Spain. As the saying goes, if Portuguese cuisine can make it there, it can make it anywhere. Let the elevating continue in and outside of Portugal!

In the end, what does all this food elevation mean for Portugal’s restaurant industry in general? It means plenty. As Catavino recently wrote in reference to Portuguese wine “remember, a rising tide lifts all boats, or at least it has the potential to. Take advantage of this.”

Seeing positive headlines about Portugal will surely inspire the “tasca” to sharpen their homey versions of these haute dishes everyone’s talking about. It’ll give aspiring chefs and restaurateurs the confidence to move projects forward. It’ll give purpose to domestic producers; more than ever restaurants are sourcing directly from them to bring to the table the best the country has to offer. This stimulates dying economies, especially in the interior of the country where agricultural and artisanal products have sadly been neglected. It’ll also hopefully make the old guard wise up and improve. That is, if they want to survive the wave of inspired and informed visitors Portugal is sure to rake in as long as it keeps believing (and showing!) it’s worth it.

To a tasty future!

An updated list of all Michelin Starred restaurants in Portugal can be found here.