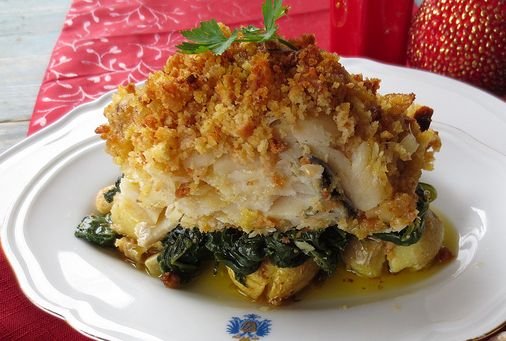 Boas Festas!  Happy Holidays from Portugal!  The Christmas season is upon us, and here in Lisbon, we’re celebrating the only way we know how, with delicious homemade food.

All major Portuguese holidays have their own unique dishes and sweets, but Christmas is by far the most plentiful among them. From mid November onward, you can peruse any bakery or supermarket to find a host of these one-of-kind desserts.

The list of sweets is extensive, but each has their own texture and flavor that is worthy of your attention. To begin with, there are two kinds of Christmas cakes: Bolo Rei (King Cake) and Bolo Rainha (Queen Cake). King Cake, not to be confused with the Mardi-Gras version, dates back to the time of the Romans and is symbolic of the three kings. Generally described as the Portuguese version of fruit cake (but so much better), it’s bread like in consistency and filled with dried fruits, nuts and topped with candied fruit and powdered sugar. The Queen cake, which is very similar to the king, but filled with considerably more nuts and raisins and sans candied fruit.

Next, you have all of the variants of the Christmas “fried dough”, modified slightly depending on the region. There are filhoses – basic fried dough made into a thin, rectangular shape with flared edges and covered in cinnamon and sugar. These can range from having a soft, doughy texture from the Alentejo region to a thin, crispy texture from the greater Lisbon and central regions- this version is normally called coscorões. Fatias douradas (golden slices) is Portuguese French toast, for all practical purposes, but covered in cinnamon and sugar instead of syrup and eaten as a dessert, not at breakfast. And let’s not forget azevias do grão e amendõa, fried chickpea or almond filled turnovers, another sworn Alentejo favorite. My personal love, however, are sonhos (dreams). These fried dough balls rolled in cinnamon and sugar have a delightfully soft and “dreamy” texture on the inside, especially when they are sonhos de abóbora – “pumpkin dreams” made with fresh pumpkin. Additional fillings include cenoura– carrot, and leite– milk, which give it a more creamy texture.

Aside from the vast array of pastry shop sweets, families will also make their own creations to serve with Christmas dinner: normally variants of pudim- Portuguese flan and arroz doce- rice pudding. And don’t think for a second you’re familiar with this dish, because despite the tendency for cultures internationally to have their own rice pudding, the Portuguese have created one unique onto themselves.

And lastly, one of the most beloved Portuguese Christmas desserts, but one of the hardest to stomach for foreigners, is the lampreia de natal – a platter of nothing but sugary egg yolks formed into the shape of a (very creepy looking) lamprey fish, lying on a bed of, what else, more sugary egg yolks! Eggs have always played an important part of the Iberian history; hence it’s difficult to find someone who isn’t a yolk fan. As a foreigner, I admit it’s a bit harder for me to stomach, but never let the appearance deter you! Remember, one can’t always spot a dish with incredible flavor by the appearance alone.

You would imagine that the Portuguese would have fallen into a diabetic coma come Christmas Eve/Day, but no, they do manage to mix some delicious savory dishes into their holiday meals. On the Véspera de Natal – Christmas Eve, the meal is actually very simple. Keeping with the Catholic tradition of no meat, the Portuguese make fiel amigo bacalhau (salted cod) in a traditional Christmas Eve preparation called Bacalhau da Consoada. Here, the fish is simply boiled up with potatoes, cabbage, carrots and hard-boiled eggs, and drizzled with Portuguese olive oil. It’s one of the most humble manner in which they enjoy salted cod.

However, for the Portuguese who prefer a less robust flavor of bacalhau, there is the less potent variations such as: Bacalhau á Gomes Sá – salt cod casserole made with onions, garlic, potatoes, boiled eggs, olives and parsley, or Bacalhau Assado – roasted salt cod. Some regions outside of Lisbon, such as in the North and in the Algarve, prefer to have polvo– octopus on Christmas Eve, usually roasted or made into a rice dish. Come Christmas Day, dinner favorites include the classic roast turkey and stuffing, but the more Portuguese way, especially in the North, would be cabrito assado– roasted baby goat, which is absolutely delicious. A northern tradition is to make roupa velha – “old laundry”, in which they take the leftover bacalhau consoada from Christmas Eve dinner and basically chop it all up together, mix it with egg and bake it in the oven as a casserole, good idea!

So if you happen to be visiting Lisbon this Christmas, or any part of Portugal, definitely don’t miss out on all the sweets and find your nearest pastelaria! And if you’re not lucky enough to befriend a little Portuguese granny and get invited to her house for Christmas dinner, check out some of the traditional tascas and restaurants in town as they will be serving up several of these dishes around Christmas. Later, take a stroll down Avenida da Liberdade in Lisbon at night and enjoy the beautiful Christmas lights along the street, which continue through the downtown Restauradores, Rossio, Figueira and Comercio plazas out to the river.  If hunger strikes again, you can grab a dozen castanhas assadas- roasted chestnuts from one of the many street vendors for only €2.00. If you have small children in tow, head down to the Aldeia de Natal– Christmas Village, located in Parque Eduardo VII just up from Marques de Pombal circle (at the beginning of Avenida de Liberdade).

Below I have included a recipe for my favorite sweet, sonhos de abóbora, if you’re keen to bring a little Portuguese Christmas spirit to your home.