Cheese from Picos de Europa: Home of the Spanish Blues 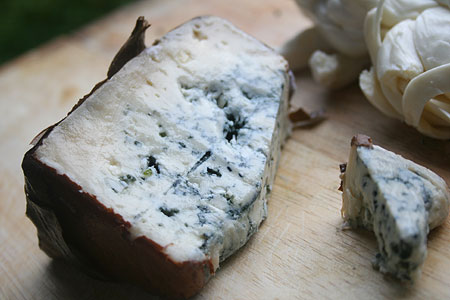 Shared between three autonomous communities (Principado de Asturias, Cantabria and Castilla y León), the Picos de Europa mountain range towers above the north-western Spanish seaboard south of the Bay of Biscay. These mighty limestone mountains with steeply jagged peaks, deep cave formations and exuberant alpine forests are home to some of the most captivating blue cheeses in Spain; each with their own spirit and singularity. With their sharp flavors and smooth textures, blue cheeses are usually reserved for last by cheese lovers when indulging in their passion. Our Spanish line up includes some of the most engaging blue cheeses available. And the best way to weigh one against another is to try them side by side. Our blue cheeseboard was eaten from milder to stronger cheeses in the following order: La Peral, Valdeón, Picón and Cabrales.

Myth has it that the discovery of cheese was a happy coincidence that was set in motion when a sheepherder forgot his fresh sheep’s milk in a nearby cave. Returning to the cave weeks later, he found the milk hardened and laden with mould. Driven by hunger and upon trying it, he discovered that he liked its complex texture and taste… Largely, this is due to the influence of a certain micro-organism that dwells in caves where the air is cool and humid: the Penicilium mold.

Today, the process of controlling bacteria and incorporating it into milk or curds for the sake of flavor and texture, then aging it in caves for depth and character, has turned cheese-making from a craft into an art form. Penicilium roqueforti (or any of its strains) can be injected artificially into the cheese using a syringe, its spores swabbed into the curd to develop during the ripening process, or it can be rubbed into the cheese so as to make its way into it slowly from the exterior.

The individuality of Spanish blue cheese stems from the fact that there’s no need for artifice: Penicilium can be found naturally in the ecosystem of the cool caves of the Picos de Europa. This limestone rock mountain range has suffered greatly from erosion due to rain, which formed deep caverns that have been used as storage rooms and cellars for centuries. Caves for maturing cheese are selected by altitude, natural ventilation/air circulation, constant cold temperatures and high humidity levels, which favour the curing process. Location is precisely the factor that has had the largest impact in the way each of these Spanish blue cheeses is made and how their traditional manufacture has been maintained. The rough Picos de Europa were a secluded region with high peaks (it has more than 200 mountains over 2.000 meters above sea level) and alpine valleys, which helped preserve specific cheese making methods and traditions constituting similar yet unmistakably unique types of cheeses in the area.

Queso de Cabrales is probably the best known gourmet cheese from Spain. This artisan mountain cheese is produced exclusively in the Cabrales village and the Peñamellera Alta areas in South-eastern Asturias. Originally, it was made mainly from cow milk, with the more complex mixed milk variation being only made during the spring and summer months, when sheep and goat milk are more readily available (goat milk adds a pungent acidity; sheep milk makes its texture smooth).

Its method of production, zealously guarded by generations of goat and sheep herders, is similar to Roquefort: the unpasteurized milk coagulates slowly at low temperatures, the whey is drained naturally, and the salting of the rim is done by hand during the first lactic fermentation prior to being aerated and stored in the cold and humid caves. The cheese is turned periodically until its completely overrun y the Penicilium Cabralensis mould, which penetrates the cheese wheels naturally from the outside inwards and gives the cheese its characteristic blue veining and thick texture. Regarding presentation, Cabrales was traditionally sold wrapped in maple or sycamore leaves –some cheeses from small artisan producers can still be found wrapped in leaves-; nevertheless, today its sold wrapped in green foil and stamped with the DOP logo to guarantee authenticity.

The Cabrales rind is soft and thin, with its color ranging from light orange to grey depending on the maturation time (which ranges from semi-cured to cured). Due to the microbiological development on the outside, some areas may appear yellow or red. Inside, the ivory-colored paste must be compact, but also soft and unctuous, with small blue-green penicilium wells present homogeneously yet never showing traces of having been inoculated mechanically. Intensely pungent, Cabrales’ aromas remind us of mould, lactic fermentation and humid caves. The more mature kind (curado) may showcase aromas of spices and nuts (as a result of the fatty acids naturally contained in the milk and the cheese’s slow ripening in contact with lactic ferments) as well as a slightly piquant finish. Its mouthfeel is slightly gooey with a tendency to adhere to the palate.

Despite Asturias being home to the historic Cabrales cheese; one can also find examples of newer, more modern blue cheeses like La Peral. Made in the Concejo de Illas in central Asturias, it was created by Antonio León Álvarez, a cheesemaker from Brañes (Oviedo) in the early 20th century. It’s made exclusively from Friesian cow’s milk (with the addition of sheep’s whey), injected with spores of Penicilium Roqueforti and aged for a minimum of two months. It’s the last Asturian cheese to become part of the gourmet cheese world after being awarded the “Best Blue Cheese in Spain” award by the Spanish Ministry of Agriculture in 2011.

Its exterior is greasy and unctuous, with very light definition of the thin, white and yellowish rind. When cut, it presents a small amount of irregular, variably sized and unevenly distributed greenish blue holes and crevices (Penicilium wells) as well as traces of mechanic inoculation. Mild, creamy and heterogeneous to the palate, La Peral is a cheese of medium firmness showcasing delicate animal, herbal and nutty aromas.

Made in the northeastern part of Castilla y León, the production of Valdeón cheese using goat milk predates the roman conquest of the Iberian Peninsula. The first written references to cheese making in the Posada de Valdeón area –where this cheese is produced exclusively- date from the 19th century, cited in Pascual Madoz’s “Diccionario geográfico-estadístico-histórico de España y sus posesiones de Ultramar” (1845). Having reached its IGP status in 1998, Valdeón cheese is made from a mix of cow (Fresian and Alpine Brown), with a small proportion of Pyrinean mountain goat milk and the sporadic addition of sheep’s (Laxa/Lacha) milk.

Despite being located 900 meters above sea level and having high rainfall and winter frosts, the climate in Valdeón is slightly less humid than that of surrounding areas in the Picos de Europa (like Cabrales). This causes its cheese to develp a grey, rough and uneven rind as well as less mold concentration in its creamy white interior, especially when compared to the neighbouring Cabrales and Picón cheeses. The Penicilium wells of green and blue color are irregular in size and distribution, giving the soft interior different degrees of cohesion (the longer the cheese is matured, the more friable). It displays medium intensity aromas of mold and wet-cave, girdled with lactic (fresh milk) and herbal/spicy notes. Lightly piquant and complex, its melt-in-your-mouth butter-like texture should be highlighted.

The district of Liébana in the province of Cantabria has been linked to cheese production for a very long time. The medieval registry book “Cartulario de San Toribio de Liébana” (962 AD) mentions a barter transaction of land in exchange for different goods, among which are seven cheeses; furthermore, in 1354 the inventory of the church of Santa María de Lebeña shows details of the number of Picón cheeses that were paid as tribute to the church by its serfs that year.

Made from a mix of cow (Fresian, Alpine Brown, and the native Tudanca), sheep (Latxa/Lacha) and Pyrinean Alpine goat’s milk, Picón Cheese is matured in the humid limestone caves of the Picos de Europa at a constant temperature for a minimum of 12 weeks. To the eye, Picón’s rind is soft and thin, acquiring a grey color in the caves and on occasion showing yellow or orange in areas where there are high levels of microbe growth. Soft and unctuous, its paste can range from off-white to ivory depending on its level of maturation and the type or types of milk used. It presents homogenous small blue-green Penicilium wells and no traces of inoculation. The paste is coarse and slightly moist, with a sandy mouthfeel that adheres to the palate. Its aromas of sheep/goat herd and wet cave return in its slightly salty and bitter taste. Its poignant finish pays homage to its name: Picón (meaning “piquant” in Spanish). Picón-Bejes-Tresviso enjoys DOP status since 1994 and can be found in stores wrapped in yellow/gold foil and showing prominently the DOP seal.

Matching blue cheese with full bodied and brawny red Crianza wines from Spanish DOs like: Toro, Bierzo, Jumilla, Priorato, Ribera del Duero and Rioja (go for the more modern styles, as the finesse of classic Rioja may be overwhelmed by the robust taste of these cheese) would be the first choice on the grounds that these styles can stand up to the sharp and persistent savoriness of the cheese. Some experts recommend pairing with young, full bodied and zesty whites (Rioja Garnacha Blanca or Godello from Rías Baixas) as well as with fresh, floral and dry sparkling wines such as Cava (go for the smaller, more conscientious producers) which can clean the palate of blue cheese’s persistent and poignant aftertaste.

Other options are mild and more refined wines like Port, slightly sweet sherries (Amontillado or Oloroso); even sweeter wines like Pedro Ximénez or Moscatel. These last pairings are exceptional at the end of a meal, making cheese an awesome alternative to dessert, so just run out to your cheesemonger and try them!