Grilling Season: How Portuguese Expats Fire it Up and What They Pour to Cool Down 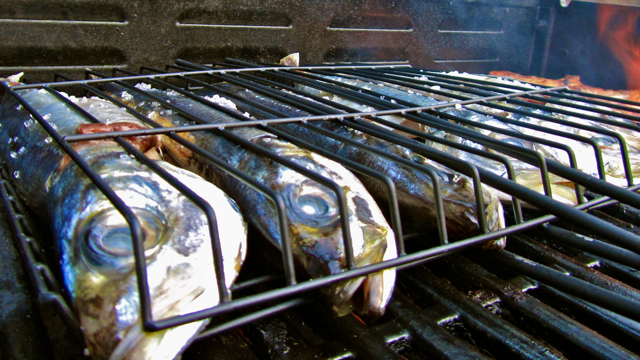 Portuguese expats in the U.S. like to joke that if there’s a waft of sizzling sardines in the air then a fellow immigrant can’t be too far. They’re usually right. Growing up in New Jersey, expats’ grills were hardly ever graced by the usual American fare of hot dogs, hamburgers, porter house steaks, ribs, lobster tails or corn on the cob. Our grills brimmed with sardines, carapau (small mackerel), pork cutlets, codfish, pork belly, chourico (Portuguese sausage) and whole or select chicken pieces. The side dishes generally consisted of boiled young potatoes, skin on of course, garnished with olive oil. Or, a salad packed with lettuce, tomatoes, and olives and charred red and green bell peppers. To top the mackerel we minced white onion, garlic, parsley and red pepper flakes and black pepper combined with olive oil and red wine vinegar in a bowl. This they dubbed “molho a espanhola,” or Spanish-style sauce, though I have yet to confirm whether such a sauce actually exists in Spain.

As grilling season is once again in full force in the northeastern area of the United States, Connecticut for me to be exact, the aromas carried from my grill on to my sleepy suburban neighborhood breeze where as far as I know live two other Portuguese families, evokes the lively barbeques my big Portuguese immigrant family organized every summer. As our neighbors bring out their best BBQ sauces and ribs, we bring out the sardines and the whole butterflied chickens (I use Cornish hens mostly since they cook much faster). Our secret weapon is Piri-Piri, one of the ingredients that distinguish our cooking from other Mediterranean-based cuisines such as that of our Iberian cousin, Spain, or other countries in Southern Europe. The mildly hot and sweet concoction is a co-invention of the Portuguese and its former colony Mozambique using birds-eye chili peppers.

For our summer grilling menu, I selected chourico and pork belly for appetizers and sardines and mackerel for a traditional feast in honor of the summer Santo Antonio and Sao Joao festivities, with the most impressive festivities held in Lisbon and Porto. In this article, I’m including the recipe for grilled Cornish hens (see below), which are a treat with their charred skin and buttery meat. The chourico, which you can find at most Portuguese supermarkets, and the sardines, are the simplest of the items on my list. You plop the whole chourico on the grill and toast on both sides to your liking, usually seven or so minutes each side will do until a bit charred. I like to serve with red wine, though in this piece, I’ll be highlighting three non-reds that are staple pairings for Portuguese expats’ grilling feasts. Sardines also couldn’t be simpler; just cover them with plenty of coarse salt and place them on the grill. Let them be for about five minutes, then flip and leave for the same amount of time.

The custom is to eat them atop a slice of a cornbread called Broa. This is excellent with Vinho Verde, which I’ll get to in a sec. The mackerel is a flavorful fish that also requires mostly a generous amount of coarse salt on each side, but I brush a mix of olive oil, lemon juice and black pepper on the fish a few times while on the grill to seal in the moisture and additional flavor (older gen expats will argue that they’re best with just the salt, but I beg to differ when it comes to mackerel and similar fish). You can place these directly on the grill, but if you do so make sure to oil up the racks a bit before adding the fish or use a greased grilling basket so the skin doesn’t stick. Once they are done and in a tray pour the “molho a espanhola” over them and enjoy. For the pork belly, also grease up the grill racks before laying down the slabs of thick bacon directly on the grill after covering both sides with a generous amount of coarse salt (yes, coarse salt is key when expats grill. And in this case, it suffices as the sole seasoning). Once the thick fatty skin parts are slightly burnt on the edges the meat is done. This is great tucked inside Portuguese rolls. Warning: It might be a challenge to eat anything else when pork belly is on the menu. But still my favorite item is the whole grilled chicken or Cornish hens.

Grilling season couldn’t be complete without the thirst-quenchers of the gods. Expats love their beer, usually imports like Super Bock or Sagres, but when it comes to wine, the refreshing Vinho Verde from the northern Minho region reigns supreme. For our summer spread, we paired our sardines with an Aveleda Fonte 2009 that complimented the salty crisped fish with its refreshing acidity, grassy and mineral lightness with fruity and floral hints from a blend of Loureiro, Trajadura and Arinto that offer up notes of resin, lime, green apple, peach, and pear with a gentle fizz that is typical of this style of wine. Its effervescent and low alcohol levels make it an ideal choice for humid scorching summers in the northeast. New this year, I tried a light Lisbon-area white. The 2010 Confraria uses a single Moscatel varietal, a grape associated with the honey and raisin flavored Setubal-area dessert wine of the same name. This paired best with the Cornish hens and the salads sweetened by the charred bell peppers that married perfectly with the semi-sweet Moscatel that smells sweeter than it actually tastes. This wine also has a touch of bubbles making it a lovely refreshing summer selection. I’m also a sucker for roses (or rosados) during the warmer months. For red wine drinkers having withdrawal as the summer menu beckons lighter wines this may be a temporary solution. (Though, I must confess that in my experience convincing a die-hard red wine drinker to consider “pink” wine is no easy task.) This season, I grabbed a bottle of the 2009 Dona Helena blend of the rustic Castelao varietal from the Sado region and the international Syrah which has adapted quite well in Portugal, especially in the more southern areas of the country. This isn’t an overly fruity or fragrant rose, it’s well balanced and somewhat astringent, yet soft. This paired especially well when paired with this succulent Cornish hen recipe.

Whether an expat or not, grilling season in America ushers in seemingly endless hot days spent with friends and family in smoke-enveloped backyards where the gatherers lounge on lawn chairs thawing from long harsh winters and drinking to the lazy days of summer.