History of Jazz in Catalunya, Spain 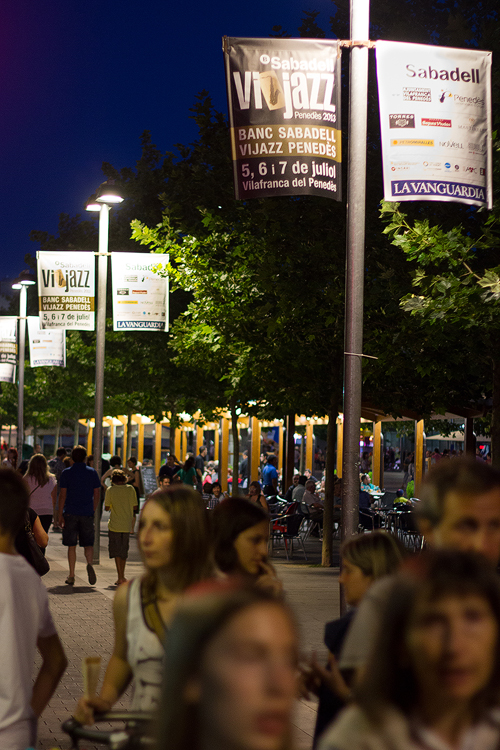 Welcome to the Vi Jazz festival in Vilafranca del Penedés: balmy summer nights, free Jazz concerts galore, and abundant local wine in the historic center of this modest Catalán city of around 40,000 inhabitants. Dating back to the 12th century, Vilafranca is the economic engine and heart of the Penedés wine industry. While Penedés garners most of its international prestige from the crisp, bubbly cava that flows like rivers through the daily lives of the people of Catalonia, the region also produces whites, reds, and rosés of admirable quality. Interestingly, though wine takes center stage all year round in Vilafranca, on every first weekend of July, Jazz music from around the globe shares, if not dominates, the spot light. The crowds are thick and span generations as people drink local wine from the standard-issue glasses dangling from their necks. Revelers jostle for a view of internationally-famous musicians playing late into the night at the foot of Vilafranca’s Basilica Santa María; a towering gothic cathedral dating back to the 14th century.

Living in an international city like Barcelona, a mere 30km train ride brings you to a completely different cultural and physical landscape. The gently rolling hills and plains of Penedés are covered with low-trellised vineyards, and the people are a true representation of real life in Catalonia: families and friends enjoying a weekend night of inspiring food, wine, and music.

The history of Jazz music in Catalonia can be traced back to the 1920s; the time period in which America was first experiencing the movement of Jazz from the small and unknown to the mainstream. Barcelona in the 1920s was a haven of romantic cultural development and artistic exploration. From the 1920s to the 1960s, major American Jazz artists regularly visited Barcelona, spreading their musical influence and helping to develop the Catalán’s passion for Big Band, Swing, and Experimental music. Over time, traditional musicians from Barcelona began to acquire a taste for the syncopated rhythms and dissonant melodies emanating from across the Atlantic.

Tete Montoliu is the undisputed father of the Catalán Jazz movement. Born blind in Barcelona in 1933, Montoliu studied music at a conservatory level in the city and followed his passion for Jazz, despite the genre being labeled as a negative foreign influence on a unified Spain by Franco’s fascist regime. Musical exchange between Montoliu and visiting American Jazz musicians through the 1940s and 1950s helped hone his already unique piano style and eventually paved the way for the internationally-renowned Catalán Jazz musicians of today.
It was in 1929 that the first Jazz-oriented club nights became major events in Barcelona, thanks to international visitors to the city’s Universal Exposition on the rocky, costal mountain of Montjuïc (later home to the 1992 summer Olympics).

Jazz is now commonplace in and around Barcelona, from the festivals of Vi Jazz (July), Barcelona International Jazz Festival (October-November), and Jazz Terrassa (March), to the weekly performances in local bars by young, international, gypsy-Jazz quartets. Every Monday, lively open jam-sessions emanate from Jamboree; one of the cities oldest and most iconic Jazz venues, founded in 1960. As a general practice, Jamboree features 60% Catalán Jazz, 20% America Jazz, and 20% European Jazz in its yearly program.

Jazz clubs and concerts in Catalonia range from subdued and scholarly events to outright parties. In dozens of venues around the city one can find it all – from an international Jazz performance with theater seating, a hushed crowd, and velvet curtains, to a small, sweltering, “counter-culture” club down a nondescript alley, full of swing-dancing university students drinking cheap beer, surrounded by the smoke of hand-rolled cigarettes, blown weakly by the blades of a lazy ceiling fan.

The fact is, the music of Catalonia, from traditional folk to modern Jazz, has very little to do with what one may consider “Spanish” or “Latin” music. Just like tapas and paella, salsa and flamenco music have been imported to Barcelona to appease the tourists who come to the city looking to have a “Spanish” experience. Upon making local friends here in Barcelona, I was instantly intrigued by the popularity of swing dancing with Catalán youth (and how virtually unknown this phenomenon is to the average weekend visitor). As with other things Catalán (wine, charcutería, fútbol, and autonomy), Jazz music here is deeply rooted in tradition. A musical movement that persevered through war, oppression, and development, Jazz has as much to do with Catalonia as it does New York City (though on an admittedly smaller scale). Jazz fits perfectly with the independent improvisational nature of Catalán culture, and like the multitude of other art forms that Barcelona nurtures and the grape vines that cover the surrounding countryside, Jazz will continue to develop and grow, yielding rich musical fruit for locals and visitors alike.