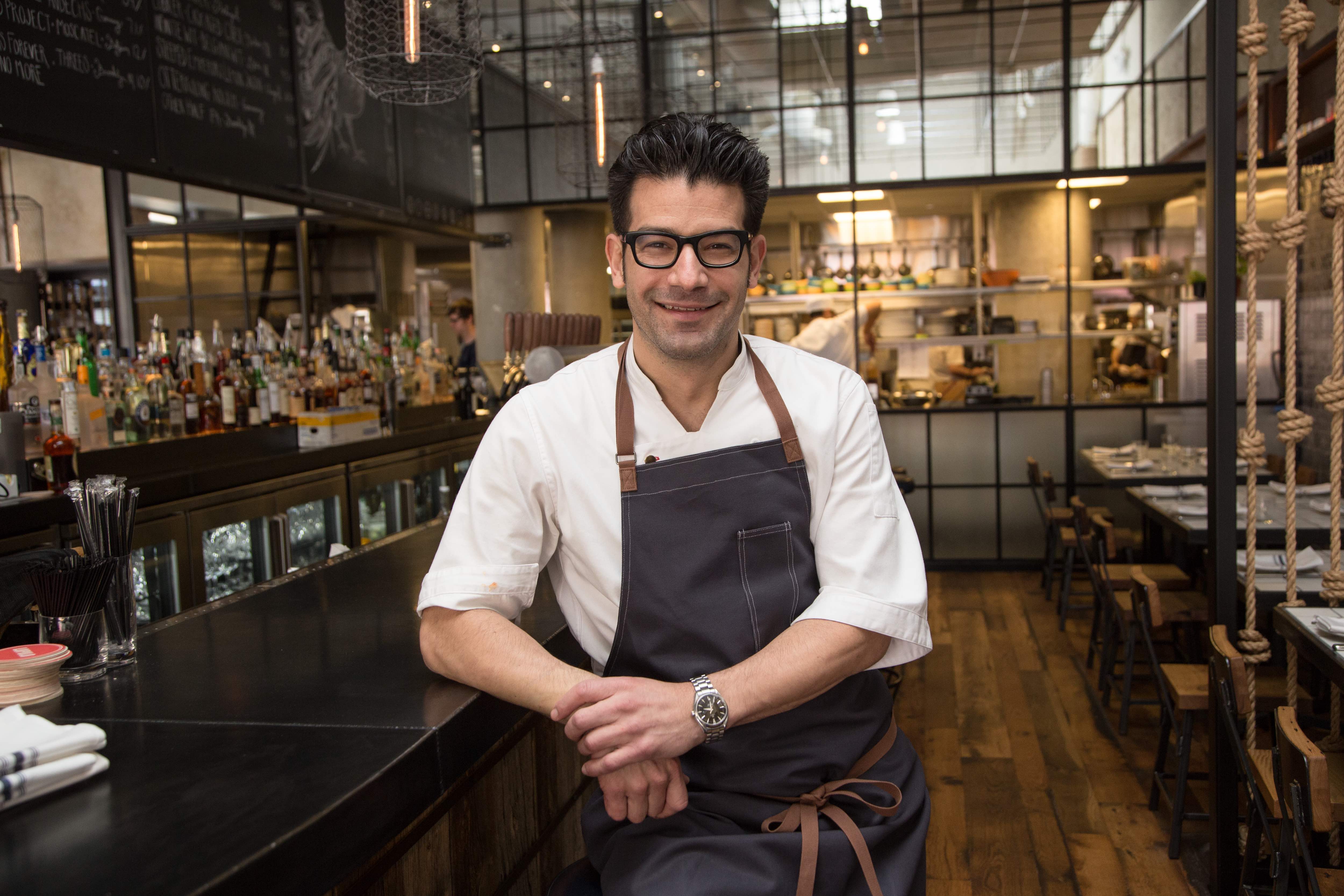 There’s a little slice of Lisbon’s vibrant food scene in New York City these days thanks to Michelin star Chef George Mendes. For anybody that’s been to Lisbon lately, you’ll instantly pick up on the similarities between the haute cuisine hotspots chefs like José Avillez have created in the recent past with his acclaimed Belcanto and several modern reinterpretations of Portuguese tascas (taverns) and cervejarias (beer halls) with places like Cantinho do Avillez and George’s own two contrasting NYC restaurants – Aldea and Lupulo.

Interestingly, as Lisbon’s Michelin restaurant scene bubbled and eventually erupted so did George’s own success story on the other side of the Atlantic, where the chef was raised as a child of Portuguese immigrants. Must be those Michelin stars aligning! Whatever the magic, George gives New Yorkers and travelers to the city two distinct Portuguese experiences that mirror closely what Portugal’s top cities, Lisbon and Porto, offer today with the revival of recipes that twist tradition for this generation of discerning foodies. Originally Mediterranean, Aldea morphed into a fine dining Portuguese restaurant.

On the other hand, Lupulo (hops in Portuguese) is George’s take on a casual cervejaria decorated with nautical ropes and blue and white tiles paying tribute to some of his favorite beer halls in Lisbon with tiny special touches like quirky dessert plates by the revered Portuguese artist Bordalo Pinheiro. Lupulo features rustic Portuguese flavors with a stamp of sophistication, something the talented chef emphasizes isn’t on purpose. George jokes, “It’s the only way I know how to do it.” No complaints here! George’s Bolinhos de Bacalhau (codfish cakes) is a concoction of crispiness, creaminess and fluffiness served with dollops of Piri-Piri mustard, a winning combo of inspiration and comfort in what is essentially a peasant Portuguese finger food of cured codfish scraps, mashed potatoes, onion and parsley frittered into an egg-shaped bite. George takes Portugal’s trademark of transforming frugal into fantastic to new heights. “It’s my interpretation,” he says, “not necessarily by the book Portuguese but with Portuguese flavors.”

With two restaurants in the big apple, a breakfast counter called BICA (paying homage to the espresso shot) and a beautiful cookbook, “My Portugal,” George started out simply by wanting to run a successful restaurant in NYC – no small feat in such a competitive market. But he’s certainly outdone himself! Despite introducing Aldea as Mediterranean not specifically Portuguese, his strong roots ripped through passionately with memorable dishes like the Arroz de Pato, his signature duck rice. It didn’t take long before the media picked up on all the signs that George had an undeniable Portuguese identity that voiced itself through his dishes, proclaiming Aldea a Portuguese restaurant.

“Aldea was an opportunity to introduce some Portuguese dishes, but I was careful because nobody really knew what Portuguese cuisine was and I had to run a business, so I had to make sure that whatever I did was understood by the New York City public.” No need to explain, George, we get it! If you think Portuguese food is misunderstood today, think nearly 10 years back folks. Often overshadowed in the U.S. by Spanish cuisine – the sister cultures share similar base products – George can confidently claim that today Portuguese cuisine has its own voice. Probably the most obvious differences between these two Iberian cuisines, he points out, is Portugal’s greater use of bacalhau (cured codfish) as well as pork. And, less straightforward but nonetheless significant, Portugal’s unique culinary worldliness (the country was, after all, the first global empire) which shows up at the table in ways unseen in any other Mediterranean country. Portuguese cuisine embraces a gastronomical legacy laced in an early Roman and Arabic occupation, the Age of Discoveries (you’ll find references on Lupulo’s menu to Portuguese navigators like Magellan) and long lasting colonies in Africa and Asia with ties to Brazil. The result is a Mediterranean base infused with global, exotic flavors that include birds-eye chillies, cilantro, curry, coconut and cinnamon – to name a few … What’s been interesting about generating awareness for Portuguese cuisine, says George, is that once people discover it they can relate to it immediately because we’re using ingredients that they’re already cooking with regularly.

At Lupulo, you’ll discover all of these flavors in thoughtful dishes with a nod to some of the most rustic flavors in the Portuguese culinary repertoire, such as Bacalhau à Gomes de Sá (codfish, potato, onion and egg casserole) and Pâté de Carapau (mackerel mousse). This very Portuguese characteristic of unexpected blending is what awaits you at Lupulo.

“Aldea was inspired by a lot of recipes from Portugal, but it was more Mediterranean with French technique and lots of farmers’ market ingredients. Eventually, it evolved into more dishes that were closer to the Portuguese than anything else. As Aldea grew and evolved, I gained the confidence to take the project and push it forward and start thinking about another restaurant that would be even more authentic, and a reflection of my ancestry, my family and rustic Portuguese cooking.”

This time, George also wanted a restaurant that reached more people in a larger space with lots of seating and a big bar in a high trafficked location. On a corner just south of Herald Square, Lupulo delivers on all with its newly-opened BICA breakfast counter (the Pasteis de Nata – eggs custards are a huge draw) as the cherry on top.

To maintain an authentic tie to Portugal, George imports as many ingredients as possible. His canned sardines come from the beach town of Nazaré; he whips up his Arroz de Polvo (octopus rice) with Arroz Agulha; and at the top of his beer list is Sagres, a staple of Portuguese beer, which he hopes will gain mainstream exposure with a little push from Lupulo. For the future, George is hoping to get some Portuguese artisanal beers on the menu to shine a light on that currently evolving industry. These old country ingredients keep George even more deeply connected with his identity. Through them, he can paint a picture of his Portugal on a plate.

“I don’t have any other way of describing myself. It’s about creating an identity, creating my voice. I think that as a chef you want to distinguish yourself from others. A really good chef is a craftsman, he’s also an artist. But as an artist you need to have a definition. Just like you identify a Pablo Picasso, a chef’s work has to be recognizable with his own voice and his own history, so that it has feeling, emotion and meaning. Chefs interpret all of this through their work, and I think that’s what I have done with Aldea and Lupulo – they are an extension of me,” shares George, taking a generous bite of his Filet de Bacalhau, a cured cod filet sandwich topped with spicy pickled ramp mayo in a potato bun. “If I were just cooking food without any meaning, history, reason, or connection to my childhood and the flavors that I’m familiar with then it wouldn’t have any depth or longevity. When I go to a restaurant I like to know the chef, I like to learn about him, and that’s basically what I set out to do with my restaurants.”

Though George has no plans to replicate his upscale Aldea, he does share a desire to pepper a few Lupulos and BICAs beyond NYC. Hey, you know what they say, George, “If you can make it there, you can make it anywhere!” It’s up to you.

If you’re keen to explore the culinary treasures that inspired George, drop us a line! We’d love to craft a customized and mouthwatering tour through Portugal!