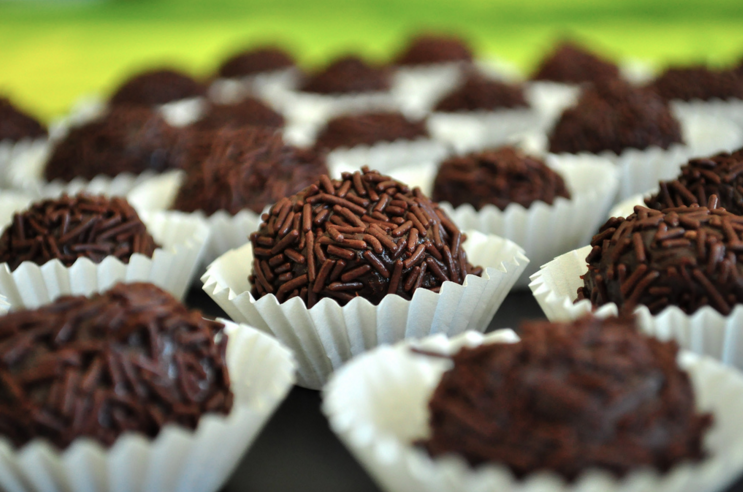 Smooth bittersweet chocolate on the tongue is one of the more indulgent treats to enjoy. It has a richness that the lighter, milkier counterpart just can’t seem to compare to. Luckily for me and all the other dark chocolate lovers out there, Portugal has a similar love for this sort of dark velvety confection, often with a flair for marrying the traditional bonbon with flavors that are all Portuguese.

When I say “marrying” the two, I’m referring to the unlikely combinations such as wine or port mixed into chocolate that doesn’t seem to affect the taste as much as the texture. Think solid ganache that melts quickly in the mouth, leaving little to no bitter aftertaste. This obviously makes it more likely to reach for another! Another such pairing is chocolate and olive oil, a buttery, almost soft toffee-like texture as it melts on the tongue, but still includes all the same taste of a good virgin olive oil; lightly fruity and pungent in the best way possible.

Chocolate isn’t just about mixing the two most ubiquitous Portuguese products out there; it’s also about injecting it into the pastries and treats that have, up until recently, been all about the Portuguese egg desserts! For instance, walking through the international chocolate festival in Óbidos will introduce you to such treats as the most famous of Portuguese sweets, the Pastel de Nata, but instead of the plain egg yolk custard filling; it has been chocolate-ified! Another such pastry would be the soft pillowy doughnut like Bola de Berlim with the egg-filling replaced with ganache. The chocoholic can now rejoice when getting their Portuguese pastry fix!

Outside of your ordinary pastelaria chocolate fusion, there are still elegant chocolate confectionaries such as liquor or fruit-filled delights, linguas de gato, and bombokas.

Arcádia is one of the most famous chocolatiers in Portugal. Found in Porto, the Bastos family has been in the chocolate business since 1933 crafting sumptuous flavored chocolates filled with everything from locally sourced fruit to Port wine.

Though Portugal has some larger chocolatiers, there are several artisanal or specialty brands in Portugal worthy of your attention. Cacao di Vine is all about wine and port-infused chocolate. They produce what they call “wine bites” and come in sixteen different sweets that celebrate all-natural ingredients in their recipes. Each “bite” package uses wine from different regions of Portugal in order to showcase the delicious differences between the vinho varieties across the country with chocolate.

And let’s not forget about one of the oldest chocolatiers in Portugal, Avianense. Founded in 1914, it’s one of the few remaining chocolate factories still in existence making exceptional chocolate in Barcelos.

Where to find and enjoy Portuguese Chocolate

Chocolate is found just about everywhere in Portugal. It’s in every restaurant in the form of a rich egg-heavy chocolate mousse for dessert, in the form of cookie peppered fudgy salame de chocolate in stores and kitchens around the holidays, and when it’s cold outside as a hot viscous beverage made with melted chocolate and milk, none of that powdered stuff! Chocolate can also be found at nearly every festival throughout the country at any given time of year, in the form of little cups used for sweet Ginja.

For diehard chocolate lovers, it would behoove them to check out the Óbidos International Chocolate Festival. They cater to both adults and children with cooking classes for young and old, fun candy-inspired characters, shows and plenty of chocolaty things to taste. There is even an artistic element featuring a phenomenal chocolate sculpture gallery.

If you’re chocolate obsessed, stay in Portugal’s first chocolate-themed hotel in the northern town of Viana do Castelo. Hotel Fábrica do Chocolate is a four-star hotel complete with a restaurant. Housed in an old Avianense chocolate factory, the restaurant features dishes with chocolate ingredients produced on-premise. And like all good “themed” hotels, such as wine, you can experience chocolate-based treatments and therapies in the form of facials and body wraps, or peruse their on-site museum.

If you’re interested in a customized chocolate tour, culinary experience or tasting in Portugal, contact us! We’re more than happy to find an excuse to enjoy chocolate alongside you!