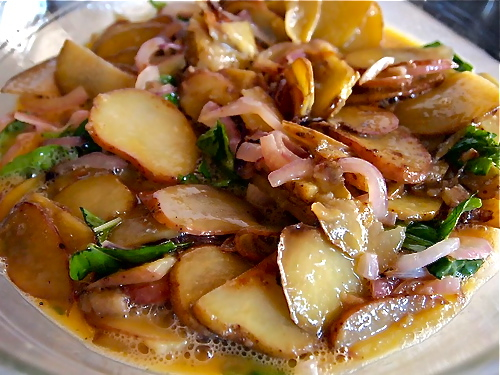 In Part I (Gazpacho), we began our journey in the heat of the south of Spain but now head to one of the country’s northern-most regions, Bilbao (as rumor/tradition has it) to modify another of Spain’s great signature dishes – tortilla española. Known by a few names – tortilla española, tortilla a la española, and tortilla de patatas – make no mistake this dish is one of Spain’s most popular and, actually, easiest to prepare. One note here: you can alter this dish in any way number of ways, but it can only be called “tortilla española” when it is cooked in the traditional method with eggs, potatoes, and onions. Anything else is just “tortilla de patatas” –not that this is a bad thing!

Historically, “tortilla” came into existence during (Basque) Carlist Tomás Zumalacárregui’s siege of Bilbao during the early 19th century. One rumor is that he created this dish as a fast, easy, and healthy dish to satisfy his hungering army. Whether true or not, it appears that the dish did spread during this time period. It could also be that an anonymous housewife created it when the general stopped by demanding something to eat, and the only available items in her kitchen were eggs, potatoes, and onions. Another story similarly states that he happened upon a farmhouse where he insisted upon a meal for himself and his troops; the unsuspecting housewife, under pressure from the general, created a dish for the troops from her only rations – eggs, potatoes, and onions (of course). He took the idea and left with it. Regardless of which story you subscribe to the result is that we now have one of the greatest tapas of all time to enjoy.

I am a huge fan of tortilla Española and almost always cook this when I have company to my home. It is satisfying, filling, and something most people do not normally have the opportunity to enjoy. A number of recipes exist even for traditional tortilla but mine originates from my dear friend, Alicia, at Catacurian in Spain (with very few modifications):

Whether you stay true to the original Tortilla Española recipe or venture off into a more exotic elaboration of the original, such as the Sweet Potato Tortilla with Pancetta or the Spicy Tortilla de Patatas with Chorizo and Piquillo Peppers, I am certain that you and your friends will enjoy it (if there is any left for them). I dare say that the general would also have approved and enjoyed either of these variations. If you have a variation leave it below in the comments and let us know what you like best!