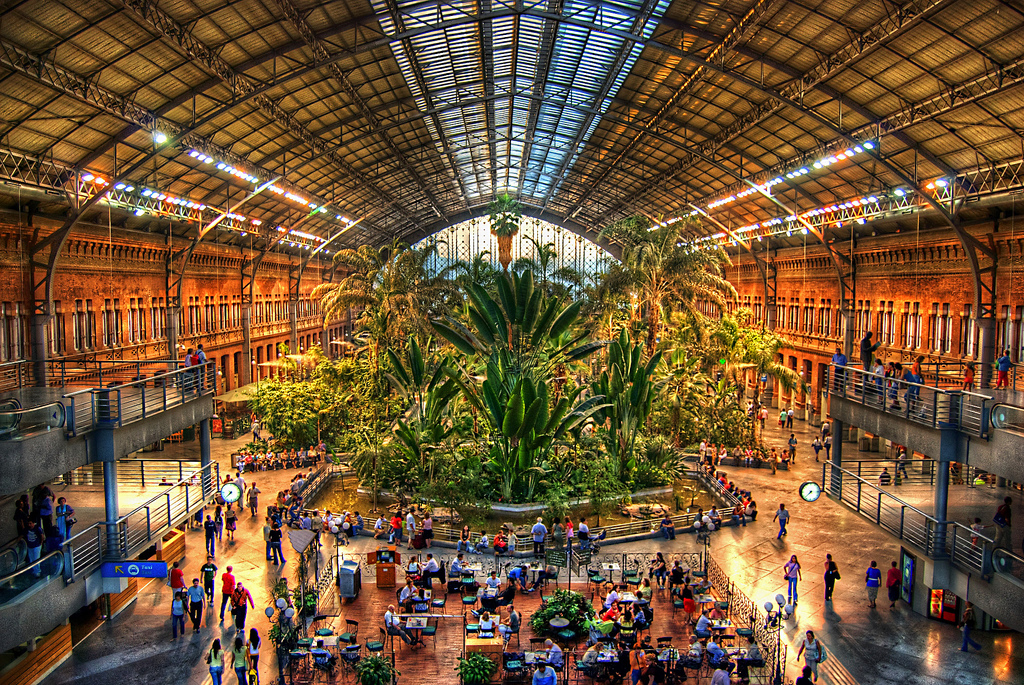 This is a cautionary tale.

We bought our tickets for 7am. It was early, but for the price we would happily manage it. But then, we were in Spain where typically late nights make a certain ruin of mornings. We went out, we had copas, we decided on a mini-siesta, aiming to get in just a few winks before the dawn cracked wide open. We opened our eyes at 9am. We’d missed our train by a good 2-hour window. “Ayyy,” you think to yourself, the trials of Spanish living.

We ran to the train station and tried to change our tickets, only to discover them no reembolsable (non-refundable), hence the rock-bottom prices. We were silent with shock and exhaustion, while we considered our options. The trip from Barcelona to Madrid is a short one by AVE, only 3 hours. By other means of transport, it can take the better part of a day. The only train tickets left were 110 euros apiece, which we decided was too much. (photo by Juan Lois)

Next stop: bus station. We discovered the trip would be 8 hours and cost 35 euros. Next stop: bla-bla car. We found a decently reviewed driver just outside of the city who could take us early afternoon for 23 euros and hopefully in less time than the bus. We would need to take the local train only 15 minutes outside the city to meet our ride. He would be waiting for us in 20 minutes at the station. We grabbed tickets, confirmed the platform (via) number twice, and headed down to meet our train. At two minutes before the time of departure, the train pulled up and we jumped on, along with the masses, lucky to have gotten a seat. We congratulated ourselves on our quick thinking. We comforted ourselves with chocolate-filled croissants. Ten minutes went by, then fifteen. When we passed the station where I thought we might be stopping, I started fidgeting nervously. Surely, it must be the next stop I thought, those anxiety-inducing memories of train travel gone wrong popping up unbidden. The train lurched and slowed and we jumped up and gathered our things. No one else moved, except a couple standing in the aisle who gratefully took our seats.

“Disculpa,” my friend said in a small tight voice to a young boy next to us. “Do you know when the next stop is?” He looked at us strangely, as one would, since it’s generally assumed that people board trains with knowledge of their destination. He laughed a little and named a town neither of us had heard of. We looked at each other in disbelief. Our faces fell, and his smile evaporated.

“And where is that exactly?”

“It’s near Tarragona,” he said, “about an hour south of here.”

Needless to say, two train disasters in one day when you’re sleep deprived and on a nearly empty stomach is a little more than the average well-traveled human can handle. At least for this girl. The rest of the morning was a blur, but we ended up meeting our ride sometime midday, and after a fairly sleepless journey, we rolled into Madrid around 9pm, eleven hours after our intended arrival. This happened exactly one week after I was given this assignment.

I will offer up the caveat that I am, modestly speaking, a seasoned traveler. I have traveled by plane, train, moto, boat, and burro to get around the U.S., most of western Europe and parts of eastern Europe and Asia. I have traveled all around Spain by train, through France, Italy, Switzerland, Germany, Belgium, Netherlands, Czechoslovakia, Sweden, Norway, Finland, Denmark, Japan, Peru, and the length of Vietnam. I have spent nine days on the trans-Siberian railroad, crossing through vast swaths of Russia, Mongolia, and China without a single hitch. How I continue to manage epic train fails at this stage in the game is beyond me. But it happens to the best of us. (photo by Marcela Escandell)

Trains are about getting places. But they are also journeys in and of themselves. If you’ve ever read Paul Theroux’s loving accounts of his travels on the world’s fabled trains, then you understand that trains are not merely instruments of travel, but sociological constructs, windows into the true insides of a culture, for better or worse. Yet, whether good or bad, I recommend a train over an aeroplane any day, and not just because I hate to fly. I love everything about trains, from their ground’s eye view of the world rushing by to the people who often make the trip a little bit more human.

Here are 6 tips that have made my life as a train traveler a little bit easier:

1: Ask Before You Leap
Every single time (except for the aforementioned episode) I get on a train, I ask where it’s going. I do this for inter-urban travel as well as for longer journeys. I am (for the most part) trained to do this after having jumped on several trains bound for the wrong destination (although some of those were before I spoke Spanish, and I was too shy to ask). It doesn’t pay to be shy. Ask and ask until you find someone who speaks enough English (or whatever language you prefer) to help you.

2: Language Lessons
Most trains are seated, meaning that you have been assigned a specific seat in a particular car, a fact sometimes concealed by the fact that your ticket is probably printed in a language you may not speak. There have been many times where I have been unable to find an attendant available in the rush to board and have been ousted out of seat after seat, until finally some kind stranger manages to help me find my car and my seat. I’ve made friends this way, that have lasted at least the journey, if not beyond. Through these chance encounters, I have learned about all kinds of new things, from places to go when I arrive to cultural nuances I probably wouldn’t have picked up on my own.

3: Patience is a Virtue
Getting angry, I continue to learn, never gets you anywhere. This is especially true in Europe, where time has its own designation and its own significance. In most northern countries, trains leave on time. In Italy, trains never do. Never. That means you still have to show up on time, and then you have to wait as long as it takes for your train to leave, even if it means sitting on the cold hard marble floor of Milan’s train station in the dead of winter, numb from the cold because there are no benches anywhere near the notification board. Even after your taxi driver has waxed poetic about Mussolini’s genius in importing thousands of pounds of Italian marble to build the station, you will continue to wonder at the dictator’s questionable decisions. Being patient is accepting that hitches are a part of the journey. Bring a good book and settle in for the wait.

4: Say Yes
When someone offers you food, take it. No one is trying to poison you. They are trying to share with you a piece of their culture, and in many places it’s offensive to say no to a stranger’s hospitality. You might not like everything you try, but you will have a true taste of the country you’re visiting, and that is priceless. To this end, it’s not a bad idea to bring some food with you or small gifts from back home to share with your compartment companions. I’ve had friends who’ve forged silent friendships over a five course meal despite sharing no common language.

5: Dine In
Perhaps this is particularly apt for trans-Siberian travel, but dining cars are worth the visit. On the trans-Siberian, the dining cars are changed out at each border crossing, which means each one is different, from the design to the cuisine. If you travel from west to east, the decor becomes successively more ornate. With this kind of long-distance travel, you get a meal ticket, which is well worth using. The food may not be top-notch anymore, but the experience of it will make up for it. It is also a good place to take refuge on an overfull train. Many times, trains in Spain and Italy are oversold and people end up sitting on the floor. Whenever I have an unseated ticket, I make a break for the dining car, because it gives me a good seat for as long as I like. This was particularly useful on a snowy night crossing over from Italy into Switzerland, when TrenItalia made us all disembark in the middle of nowhere, climb through heavy snow drifts over several tracks with our luggage and crawl up onto a platform that was higher than my waist to board a Swiss train that was several cars shorter. I have never been so grateful for warm seat in all my travels.

6: Make the Train the Trip
There are lots of different kinds of trains out there. Seek them out. In Switzerland, I got to take a handsome old carriage through the Alps from Lac Léman to Chateaux d’Oex with windows on the ceiling and an incredible view. In the Pyrenees, you take the cremallera (zipper) train through Vall de Nuria in summer or winter for stunning views of the countryside. Sometimes it’s nice to have an excuse to just sit and watch the world go by.

Theroux contends that “Delay and dirt are the realities of the most rewarding travel.” For the most part, I would agree with that. The delays and the dirt are the parts that make you see the more real side of life in the places you’re visiting. You will learn not only a lot about the people you’re visiting but also a lot about yourself. It might not always be pretty, but it’s always powerful.