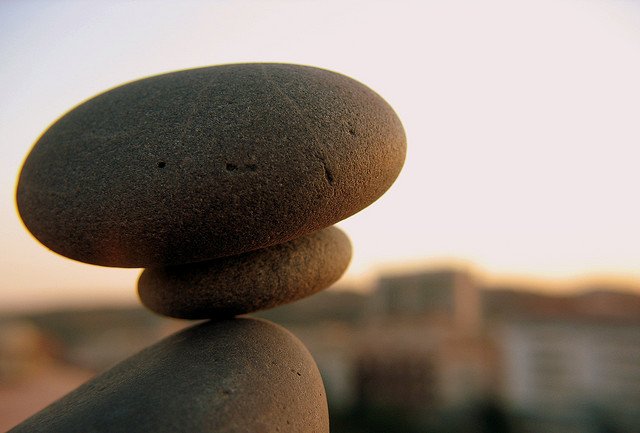 Have you ever heard the tale of Stone Soup? The legend of how this hearty soup came about is a popular one told throughout most European countries and was adapted to an American version by Marcia Brown. Each version is slightly different depending on your country or region and is usually influenced by varying historical or cultural references. However, at the base of each and every one is a uniting and heartfelt lesson about working together in times of need.

The story of Stone Soup was told to me when I was very little, but remained a simple childhood story until I landed in Portugal several years ago. The Portuguese hold this tale very near and dear to their hearts, in part due to their insatiable appetite for soup in both restaurants and around the family dinner table. However, Sopa da Pedra, as it’s called in Portuguese, seems to be the best tasting and most readily available in Almeirim, the birthplace of the story. This small city, or “capital da sopa da pedra”, is located in the heart of the Ribatejo region, just accross the river from the city of Santarém and about a one hour drive East from Lisbon.

According to the people of Almeirim, a poor friar who was on a pilgrimage stopped in the village of Almeirim and knocked on the door of a house. He was too proud to beg for a bite to eat, so instead, he requested a large pot in which he could make “a delicious and filling…….stone soup”. With arched eyebrows and curious glances, the family invited him into their home and set up a large pot over flickering flames and filled with water. Slowly walking up to the iron clad cauldron, the friar reached into his deep pocket to produce a smooth and well-cleaned stone that he promptly dropped into the boiling water. A little while later he tasted the soup and said that it needed a touch of seasoning. So the wife brought him some salt to add, to which he suggested that maybe a little bit of chouriço (sausage), or pork belly, would be better. Graciously, she obliged and dropped several thick slices into the pot. Then, the friar asked if she might not have a little something to enrich the soup, such as potatoes or beans from a previous meal. With a broad smile, she agreed, and added a healthy portion into the bubbling water. This banter continued back and forth between the family and the friar before he finally announced that he had indeed made a very delicious and filling soup. When the soup was done, the friar fished the stone out of the pot, washed and dried it off, and plopped it back in his pocket for the next time.

After hearing this version of the story, it sounded exactly like the one I had heard when I was a child, so it leads me to believe that the Portuguese Sopa de Pedra is the true story of Stone Soup. But now, decades later, I finally had the opportunity to taste the soup itself! 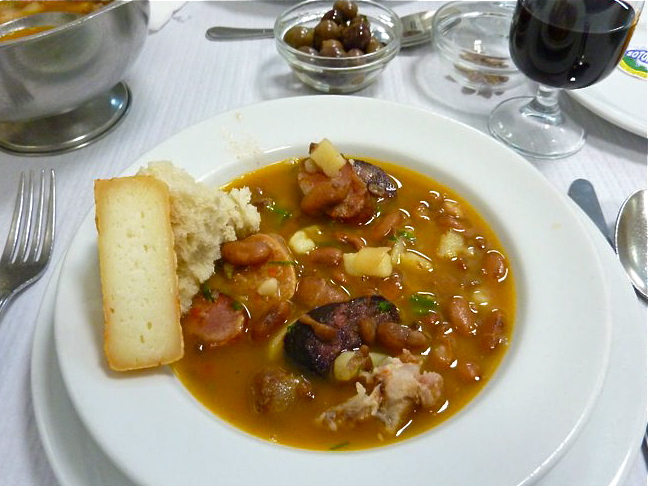 At the beginning of this month, we took a leisurely trip to Almeirim in search of Sopa da Pedra for lunch, a very easy task when the majority of the local restaurants boast of their authentic recipes. There is even a restaurant called Sopa da Pedra, located at the beginning of Rua de Coruche, where all the other sopa da pedra restaurants are situated and continues down the street until you hit the bull-fighting arena. Although tempting, we did not choose the restaurant named after the story; instead, we chose “O Forno” (The Oven), a little restaurant located at the end of the street and highly recommended by a local friend.

We ordered Sopa da Pedra for two, which was served steaming hot in a small metal soup terrine with a ladle. I would best describe Sopa da Pedra as the heartiest bean and sausage soup I’ve had the pleasure to savor; with its mouth-watering aroma and my big hunk of thick, Portuguese fresh bread and slice of Queijo da Nisa cheese. It was the perfect way to warm up on a cold, November day! Though not surprisingly, one could easily deduce that this soup was a truly a poor man’s soup in origin, due to the less-than desirable cuts of pork used for flavoring and removed prior to serving. But what I really loved about Almeirim’s (O Forno’s) version was the three distinct types of sausage. One was a local chouriço negro, a firm variation of blood sausage – a personal favorite as a result of to the richness it gave the soup – while the other two were a basic chouriço/sausage mix. You may be wondering if we found an actual stone in our stone soup but alas, we did not, though we heard other restaurants do put a small stone in theirs.

Can you make this hearty soup at home? Absolutely! Additionally, Sopa da Pedra can easily be prepared as a meal in and of itself or as a hefty starter. And with the addition of any full-bodied red from the local Tejo, or Alentejo, you can’t go wrong. On this particular day, we enjoyed a simple house red, which perfectly complemented the meal.

If you find yourself in Almeirim, having enjoyed a warm and filling lunch, don’t forget to visit the Sopa da Pedra friar himself, whose statue and soup pot have been made into a monument to commemorate the generous hospitality of the people and the man who taught them the lesson in giving back to others. He can be found just down the street from Restaurante O Forno. And if you like to carry on the legend and try making the soup yourself, I have included the translated recipe of Sopa da Pedra de Almeirim for your reference. There are also variations of the recipe from other regions in Portugal which include cabbage, carrots and pasta, but I like this one the best.

Sopa da Pedra, made from simple and inexpensive ingredients, is a tale that resonates profoundly in a struggling global economy that has forced people to take a step back and conserve and create from that which they absolutely need. And with any luck, we are sharing our limited resources with others, recognizing that it takes a community to care for an individual.

Check out this recipe to make your own  “Sopa da Pedra” or come join us on an idyllic food tour of Portugal!