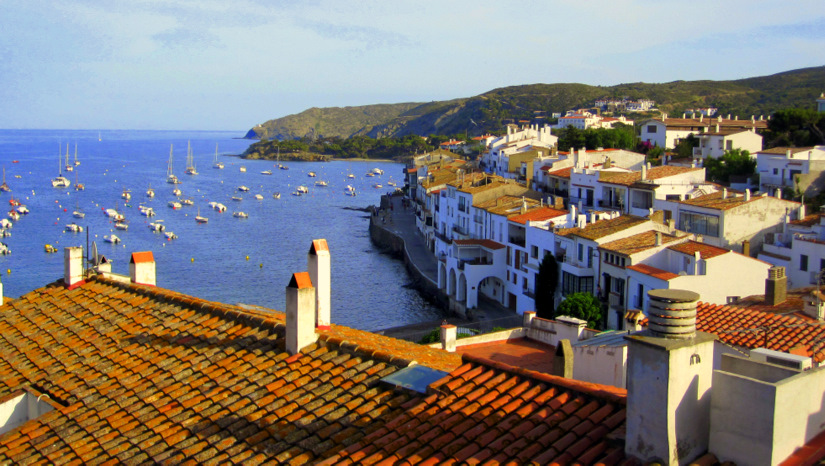 Cadaqués is a beautiful white and blue fishing town two and a half hours north of Barcelona, and is considered by many to be the “Pearl of the Costa Brava.” The history of Cadaqués is tied into a long tradition of fishing, agriculture, and viticulture, so make the most of your time in this charming village and be sure you taste as many of these iconic dishes, ingredients, and products as possible. (photo by Gabriella Opaz)

1) Taps de Cadqués (A local sponge cake)
The one and only bonafide producer of these famous little desserts, the La Mallorquina pastry shop, provides visitors, local fans, and many restaurants with boxes upon boxes of these sweet, Cava cork-shaped sponge cakes—light as air and topped with a crown of fine powdered sugar. The business was founded in the year 1700 by Joan Baptista Cabrisses, (a surname that can be traced back to pirate origins in the previous centuries), making it one of the oldest in Cadaqués. In addition to the “Taps” (meaning “corks”, and in production since 1800), the family also bakes up many other classic pastries and desserts typical of the Empordà region.

2) Arròs de Cabra de Mar (Spider Crab Rice)
Literally translated as “sea goat,” Cabra de Mar is known in English as a Spiny Spider Crab. Considered a true delicacy of the Costa Brava, this large, meaty crab is almost exclusively prepared in rice dishes. When discussing this cherished ingredient with locals, it’s a well-known fact that an Arròs de Cabra de Mar is even better when the crabs are carrying eggs, as these too are sautéed and stirred into the simmering rice as a potent finishing touch. Popular local restaurant Es Baluard features a Arròs de Cabra de Mar on their menu, as does Can Rafa (periodically), though the version at Can Rafa also includes Mediterranean lobster (llamàntol).

3) Fenoll Marí (Sea Fennel)
Called fenoll marí (or sometimes fonoll marí) in Catalan, Sea Fennel is often known as “Samphire” in the English-speaking world. The scientific name for this seaside flowering plant is Crithmum, and it has been an ingredient in the cuisine of Cadaqués for centuries. Growing not in the sea, but along its edges, this green, spongy-leafed plant with small clusters of yellow blossoms can be eaten fresh, pickled, or infused into olive oil. In addition to culinary uses, the medicinal properties of sea fennel have been recognized for eons. With a bright, lemony, spicy taste and substantial texture, the slender green leaves are used as a garnish on delicate dishes such as Tuna Tataki at the Enoteca MF wine bar, and Salmon Tartare at the restaurant Es Racó.

4) Sípia amb pèsols (Cuttlefish with Peas)
One of the most traditional and beloved seasonal seafood dish in Cadaqués is Cuttlefish with Peas. Though frozen peas are available year-round, this dish is only cooked by connoisseurs in the Spring when sweet, plump green peas are in their full glory. The ingredients are simple: Cuttlefish (not a fish at all, but a squid-like mollusk), fresh peas, garlic, onion, and tomato—sautéed in olive oil with salt then stewed together with some water and parsley. As an optional addition, halved hard-boiled eggs can be stirred in as a finishing touch. Sípia is a principal ingredient in Cadaqués and can be found in some form on virtually every menu in town, so if you haven’t tried this tender, meatier cousin of the squid, there is no better place for a maiden taste. (photo by Sam Zucker)

5) Peix fregit (Fried Fish)
The simple and delectable peix fregit (fried fish) is approached in a multitude of ways throughout the world, from the battered “fish and chips” of Britain to a much simpler and purely unadulterated dish that is enjoyed in Cadaqués. Here, small, local fish are lightly dusted with flour then deep-fried whole to a crispy, light-golden brown with no extra fuss. Some people would even go so far as to forego the flour entirely, though this little addition adds an essential, delicate crust. Know your lemon etiquette: Though serving lemon wedges with seafood is part of the local tradition in Valencia and the Balearic Islands, in most of Catalunya (Cadaqués included), putting lemon on fish and seafood—be it fried or within paella—is frowned upon and is considered insulting. It is as if to imply that the fish isn’t fresh enough and an “off” flavor must be covered up.

6) Garotes (Sea urchins)
A winter delicacy in Cadaqués (known as “eriçó de mar” in the rest of Catalunya) sea urchins are available in many restaurants, when in season. However, the most authentic and delicious way to savor these cold water treasures is as the locals do: Cut them open with scissors, wash the inside with sea water, remove the seaweed that is often attached to the shell, scoop out the raw, star-shaped roe with a piece of crusty bread, and enjoy. An indispensable part of the January 20th celebration of Sant Sebastià, garotes with bread are always paired with local red wine, to fortify one’s self against the blustery winter weather of the Costa Brava. Another holy day in which sea urchins play a starring role in Cadaqués is Ash Wednesday. If you happen to be in the area at this time, they won’t be hard to find. Try Casa Anita, an excellent spot for fresh seafood, and the oldest restaurant in Cadaqués. (Photo by Chris Nelson)

7) Anxoves (Salt-Cured Anchovies)
There are a few sources of authentic, artisanal, salt-cured anchovies in Cadaqués. The first is none other than the famous Quimeta, the anchovy celebrity of Cadaqués for decades. Her “brand” of carefully cured local anchovies is Anxoves la Quimeta, which can be found at the delicatessen Carnisseries Serra-Plà, at the foot of Cadaqués’s Medieval Jewish quarter. Another source of these authentic, tender treats is the Perruquería (hair salon) Eva Giró. Yes, this hair salon (owned by the Giró family) also doubles as a little shop for this family of master anchovy fabricators. Indicated only by a little sign—”Es venen anxoves de cadaqués” (“Anchovies of Cadaqués for sale”)— there is a separate room, apart from the hair salon, full of jarred anchovies of exceptional quality. These aren’t the type of salty filet that live eternally in squat tin cans on grocery store shelves. These are fresh products (though salted) with expiration dates clearly indicated.

8) Suquet de Peix (Fish Stew)
When fishermen of Cadaqués used to head out to sea for days at a time, they would bring tomatoes, onion, potatoes, and garlic along in the boat to cook the traditional fish stew known as suquet de peix, with the addition of their fresh catch. The most typical, firm-fleshed fish that be lend themselves to this ultra-simple soup are the Dusky Grouper (mero), Gilthead Bream (daurada), Monkfish (rap), Eel (anguiles), and—most important of all—the Red Scorpion Fish (escórpora). Unlike other traditional fish stews of the Mediterranean in which the fish and vegetables are first sautéed before adding liquid, a true Cadaqués suquet is solely simmered. The Cadaqués restaurant Es Balconet is known for serving an excellent, traditional version of this stew, and (according to the locals) even if the suquet isn’t on the daily menu, the chef has been known to whip one up from scratch with the “catch of the day.” So, ask your server.

9) Calamars Farcits (Stuffed Squid)
A popular dish throughout Catalunya, this concoction of sautéed squid stuffed with ground beef is very much enjoyed by the locals of Cadaqués and can be found in various classic restaurants around town. As with most other “traditional” recipes, the Cadaqués version of calamars farcits is simple—comprised only of whole squids, ground beef, tomato, garlic, olive oil, and a little bit of flour. The ground beef is chopped up along with the squid tentacles, parsley, and garlic, then stuffed into the body of the squid (which is sewn shut). The stuffed tubes are then floured and sautéed briefly. A concentrated sofregit (sofrito in Spanish—a reduction of onion and tomato) is made, then water is added along with the stuffed squid, and everything is simmered together until fully cooked and tender. (photo by eduroca)

10) Arròs Negre (Black Rice)
One must be careful when discussing rice dishes in Catalunya, for not all rice dishes are “paellas.” Paella is a dish with Valencian roots, and while the people of Catalunya certainly cook and enjoy paella, the most authentic rice dishes here are simply known as “arrossos” (rices). In Cadaqués, “rices” are not cooked in wide, thin metal “paella” pans, but in round-bottomed, heavy cast-iron “cassola.” While there are many traditional rice dishes in the Catalan repertoire, “black rice” is one of the most popular. Unlike a typical seafood paella with its thin layer of rice and impressive melange of “fruits of the sea,” the rice of an arròs negre in a heavy cassola is deeper, and consists of onion, garlic, cuttlefish, and squid ink. Water or fish stock can be used, and a garnish of a few sautéed prawns and/or clams is common. The squid ink doesn’t have much of a flavor, but imparts a rich, creaminess to the rice, winning this dish a spot in the “Catalan Rice Hall of Fame.”

“Cadac” 2007 Criança. Celler Martín Faixó
The Celler Martín Faixó in Cadaqués makes a variety of wines (three reds, one white, one rosé wine, one Cava brut nature, and an oak-aged vermouth made with Cabernet Sauvignon) at their farmhouse winery, Sa Peraftia, but their finest label is without a doubt “Cadac” (a name taken from the name for the juniper tree). This wine is a true expression of the local terroir of the Alt Empordà (D.O Empordà), a blend of Cabernet Sauvignon and Garnatxa (Grenache), aged for 12 months in French “Allier” oak from the famous oak forest of Tronçais. With aromatic notes of berry compote, balsamic vinegar, licorice, clove, and wild herbs such as rosemary and thyme, this full-bodied red is still elegant enough to be enjoyed on its own, or with steak, wild game, or embutidos (cured meats).

Rocacorba brand yogurts, mousses, and fresh cheeses
A brand of dairy products from the province of Girona and available at local supermarkets, the “Mousse Cafè” is my favorite. FYI: the Novavenda supermarket is the cheapest all around place in Cadaqués to shop for groceries. It’s right at the entrance to the town on the main road by the roundabout.

Joell (A rare local type of fish)
This little fish is very rare and only in season in March and April. The wild catch is often small, as they are only ever found right off the coast of Cap de Creus as they make their way south. Locals know that these little fish simply fried or cooked with rice are delicious, so they may often keep them all for themselves. If you do get a chance to try them in a restaurant or (even better) in someone’s home, you’re in for a truly authentic treat.

If you’re keen to explore the gastronomic treasures of Cadaques, let us know! We’d love to show you our hidden spots known to few, but appreciated by many!